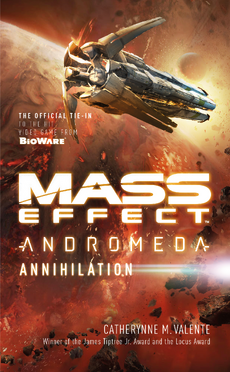 Mass Effect Andromeda: Annihilation is a novel written by Catherynne M. Valente, published by Titan Books. Released on November 6, 2018[1] in US, Canada and UK stores, it is the third of the planned line-up of titles set in the Mass Effect: Andromeda universe.[2] [3] Originally planned to be released in 2017, the author has stated that the premise of the novel had not changed since its first announcement in 2016. [4]

The novel is also available in audiobook form. It is narrated by Tom Taylorson, the voice of male Pathfinder Ryder and Scott Ryder.[5]

The Quarian [sic] ark Keelah Si'yah sails toward the Andromeda galaxy, carrying 20,000 colonists from sundry races including the drell, the elcor, and the batarians. Thirty years from their destination, a routine check reveals drell lying dead in their pods, and a deadly pathogen on board. Soon, the disease is jumping species, and it quickly becomes clear that this is no accident. It's murder, and the perpetrator is still on board.

The ship's systems rapidly degrade, and panic spreads among the colonists, for the virus yields a terrible swelling of the brain that causes madness, hallucinations, and dreadful violence. If the ship's crew can't restore their technology and find a cure, the Keelah Si'yah will never make it to the Nexus.[6][7]

Retrieved from "https://masseffect.fandom.com/wiki/Mass_Effect_Andromeda:_Annihilation?oldid=515676"
Community content is available under CC-BY-SA unless otherwise noted.