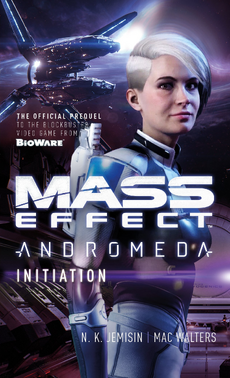 Mass Effect Andromeda: Initiation is a novel written by N.K. Jemisin and Mac Walters, published by Titan Books. Released on November 28, 2017, it is the second of the planned novels set in the Mass Effect: Andromeda universe.

The novel is also available in audiobook form. It is narrated by Fryda Wolff, the voice of female Pathfinder Ryder and Sara Ryder.[1]

Lieutenant Cora Harper joined the Systems Alliance to develop and enhance her powerful biotic talents. She was assigned to the asari commando unit Talein's Daughters, where she honed her abilities to become a skilled and deadly huntress.

Returning to Earth, Cora finds herself a stranger among other humans, and joins the Andromeda Initiative as Alec Ryder's second-in-command. The mission will send 100,000 colonists on a one-way, 600-year-long journey into the unknown. When essential—and dangerous—tech is stolen, Cora is assigned to recover it before it can be used against the Initiative, and end the mission before it can begin.

Retrieved from "https://masseffect.fandom.com/wiki/Mass_Effect_Andromeda:_Initiation?oldid=515532"
Community content is available under CC-BY-SA unless otherwise noted.