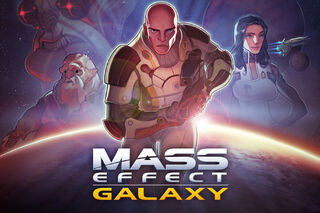 Mass Effect Galaxy is a Mass Effect spinoff developed for iOS mobile devices. With a more stylized art direction than the main series titles, this top-down shooter uses the mobile devices' accelerometer and touch screen functions. The story focuses on Jacob Taylor and Miranda Lawson, who appear together as squad members in Mass Effect 2.

Mass Effect Galaxy was released for iOS devices on June 22, 2009.

As of February 2012, Mass Effect Galaxy is no longer available for sale through the App Store.[1] However, it is still available for download if you purchased it.

The Mass Effect universe has landed on the iPhone and iPod Touch gaming platforms! Tales of human courage and individual human achievement resound throughout the galaxy. Here is your opportunity to play the story of Jacob Taylor - a new character in Mass Effect 2 - a biotic-powered super-soldier who stumbles across a plot to terrorize civilization's greatest beacon of hope.

Can you prevent an heinous attack that threatens to knock humanity off the galactic stage? 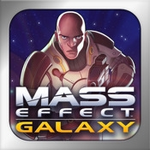 In the year 2148, mankind discovered alien artifacts that unlocked the secrets of space travel. Over the decades that followed, humans joined the galactic community aboard an ancient space station called the Citadel. In this strange new galaxy, tales of human courage resound among the stars. This is one of those stories...

Sometime prior to Jacob Taylor's introduction to Cerberus in 2183, galactic tension is rising due to batarian ambassador Jath'Amon's arrangement of a meeting with the Citadel Council, with the intention of negotiating a peace between the batarians and the Alliance.

Jacob Taylor, a biotic soldier, is on vacation aboard the passenger liner Arcturian Jade when the ship is attacked by batarian terrorists. Jacob grabs his assault rifle retained from his former job as an Alliance marine, and a battle begins which will lead him to fight an unknown terrorist threat.

Mass Effect Galaxy is a top-down shooter where the player assumes the role of Jacob Taylor armed with a powerful arsenal as well as a variety of biotic and tech powers. As the game is only available for iOS devices, players must make use of touch-screen controls to aim weapons and deploy abilities while in combat. The combat consists of moving your character around by tilting the device and then tapping on characters to lock onto them. You fire automatically, but you can use your abilities on the right of the screen by tapping on them. Jacob can gather various items dropped by enemies during fights or found throughout the world. These items grant him temporary bonuses. 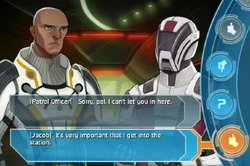 As in other Mass Effect games, the player is presented with branching conversation paths in a "conversation wheel" that displays available dialogue options. Unlike other games, the whole line of the dialogue is shown. Furthermore, a small icon shows the morality orientation of the dialogue path you may choose. The player can then choose to ask more questions, or act aggressively or kindly towards the encountered character. These choices impact how others react to Jacob. With this mechanism you can force or avoid certain situations even if some of your choices don't have much effect on the plot itself.

As in other games of the franchise, the player has the possibility to travel across the galaxy. The player can travel between mission and assignment areas with their personal shuttle by utilizing the Galaxy Map after finishing a major mission. In this mobile game, however, the Galaxy Map is limited to the mission destinations and the player cannot travel and explore the whole galaxy. On some occasions, it permits the player to choose the starting location for a series of major missions. 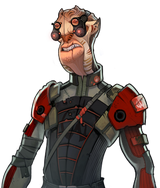 Mass Effect Galaxy's art style differs from the core trilogy's art direction significantly. While the main trilogy utilizes a mostly photo-realistic look, Galaxy has a "graphic novel" look to it. This include 2D animated cutscenes and dialogue phase between actual combat levels in the game as well as exaggerated character models. This art style was chosen both to meet the specific graphical limitations of the device the game was being developed for, but also to allow certain unique identity to separate Mass Effect Galaxy from the core titles. The effect for the cinematics is a presentation that resembles to what a Mass Effect cartoon might look like. The artist chosen to portray this new look was Joy Ang.[2]

If a player links their copy of Mass Effect Galaxy to their EA Online account through the games Extras menu and Stay Informed sub-menu and then completes a linked account, they receive the message "Your reward for completing the game is waiting for you in Mass Effect 2." EA confirms the reward as being extra dialogue with Ish. When playing Mass Effect 2, you must have Miranda and Jacob in your party to experience the additional dialogue. [3]

A free patch was released on July 2009 on iTunes. The patch boosts the performance of the mobile game by an estimated 50% for lower-end devices. [4]

Retrieved from "https://masseffect.fandom.com/wiki/Mass_Effect_Galaxy?oldid=516500"
Community content is available under CC-BY-SA unless otherwise noted.