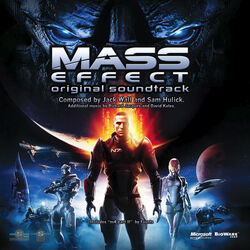 Mass Effect Original Soundtrack was released on November 20, 2007. It was composed by Jack Wall and Sam Hulick with additional music by Richard Jacques and David Kates. The song that plays over the final credits, "M4 Part II", was written by Faunts, who are from Edmonton, Alberta (where Mass Effect was developed at BioWare's main studio).

According to the press release it is inspired by classic sci-fi movies such as Blade Runner and Dune. The score blends 80's electronic music with modern orchestral scoring.

In May 2021, BioWare released the soundtrack in a free bonus content download, also featuring items from Deluxe versions of Mass Effect 2 and Mass Effect 3. It is only available until July 31, 2021 or until download limit is reached. It consists of all the listed tracks below, minus M4 Part II by Faunts, and heading the collection at track#1 is a new song for Mass Effect Legendary Edition: Resynthesis, by Sam Hulick.

From the earliest stages of its conception, Mass Effect was meant to be an original artwork about the future, inspired by the great science fiction experiences of the past. This synthesis of originality and familiarity called for a truly unique soundtrack, with ambitious goals and unprecedented challenges.

Українська
Community content is available under CC-BY-SA unless otherwise noted.