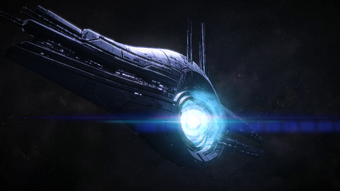 Mass Relays are mass transit devices scattered across the Milky Way, usually located within certain star systems. They form an enormous galaxy-wide network enabling rapid interstellar travel. Hailed as one of the greatest achievements of the now extinct Protheans, a mass relay can transport starships instantaneously to another relay within the network, allowing journeys that would otherwise take years or even centuries with only FTL drives to occur in only a handful of days, or even hours.

Mass relays consist of two fifteen-kilometer (or nine-mile) long curved metal arms surrounding a set of revolving, gyroscopic rings five-kilometers across. These rings contain a massive, blue-glowing core of element zero. The relays are made of an unknown but incredibly resilient material, the same material that the Citadel is built from, and are protected by a quantum shield that renders them nearly impervious to damage by locking their structure in place at the subatomic level. They are even capable of surviving a supernova's wake without any damaging effects. They are "cold" objects that don't emit any form of heat or radiation, unlike starships, making them difficult to find if their position has changed over time. Some relays, like the Charon Relay, are "gravitationally anchored" to celestial bodies; others appear to be out in space and are carefully tracked. 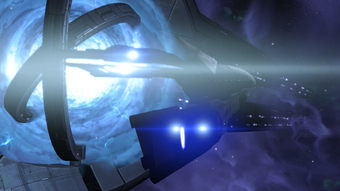 Mass relays function by creating a virtually mass-free "corridor" of space-time between each other. This can propel a starship across enormous distances that would take centuries to traverse, even at FTL speeds. Before a vessel can travel, the relay must be given the amount of mass to transit by the ship's pilot before it is moved into the approach corridor. When a relay is activated, it aligns itself with the corresponding relay in the network before propelling the ship across space. At the other end, vessels have no specific exit points, emerging randomly around the relay with positional "drift" of many thousands of kilometers being common. It would thus take an impractical amount of time to mine or trap a relay effectively.

There are two kinds of mass relay, primary and secondary. Primary relays can propel a ship thousands of light years, but only link to one other relay, its "partner". Secondary relays can link to any other relay over shorter distances, only a few hundred light years. After the Rachni Wars, space faring species in Council Space won't open a primary relay without knowing where it links to, in case they run into another powerful and hostile species like the rachni. This caused a rift when the turians found human pioneers, ignorant of this Citadel Council prohibition, trying to open any mass relay they could find while exploring the relay network, eventually leading to the First Contact War.

Many mass relays are currently dormant for unknown reasons, though they can be easily reactivated. A Prothean data cache found on Mars led humans to a mass relay encased in ice and orbiting Pluto, previously thought to be a moon called Charon, which the Charon Relay was eventually named after.

A piece of Prothean artwork depicting a mass relay, the Relay Monument, can be found on the Citadel Presidium. It has been interpreted as either a symbol of Prothean vanity, expressing the relays as their means to build a galaxy-wide empire, or possibly as a symbol of galactic unity, which the relay network also embodies. Tali'Zorah nar Rayya claims that after their long voyage through the galaxy, the quarians have also come to appreciate the aesthetic value of the mass relays.

An asari matriarch once suggested that the asari should build new mass relays of their own, but it is unknown if modern galactic civilization actually has the capacity to do so. 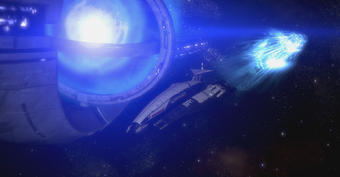 The mass relays, despite common belief, were created not by the Protheans but by the Reapers. As stated by Sovereign, the Protheans were merely one of many sentient species to find the relays and the Citadel and take advantage of them. When the Reapers wiped out the Protheans, the asari were the next race to find the relays thousands of years later. According to Sovereign, by using the relays and the Citadel, galactic civilizations evolve along the paths the Reapers desire. In addition, the relays serve to accelerate the rate at which those civilizations advance, shortening the time between harvests and streamlining the process of galactic extinction.

However, the Protheans did have a keen interest in the relays, and did manage to crack the secret behind their operation. This enabled them to build the Conduit before they were destroyed by the Reapers.

Commander Shepard also discovers that the Citadel itself is an enormous, inactive mass relay leading directly to dark space, as well as the control center for all mass relays, enabling the Reapers to sever travel between clusters the moment they re-enter the galaxy. Its reactivation is, fittingly, more complex than that of an ordinary mass relay, requiring either a coordinated effort by the keepers or manual intervention by a Reaper.

Mass relays are believed to be indestructible by galactic society, but no known attempts have been made to actually damage or destroy a relay because they are the only means of long distance space travel and thus are too vital to risk.

Dr. Amanda Kenson and her research team calculated that if a large enough mass impacts a relay with enough force, the relay should not be able to withstand it. The consequences of destroying a mass relay are immense: as a huge mass effect engine manipulating massive quantities of energy, a relay could produce an explosion of supernova proportions.

Following a botched rescue attempt for Dr. Kenson that turns into an attempt to delay the Reaper invasion, a large asteroid is purposely steered into the Bahak system's Alpha Relay. The resulting impact tears apart the relay, causing an explosion which annihilates the Bahak system and kills more than 300,000 inhabitants. 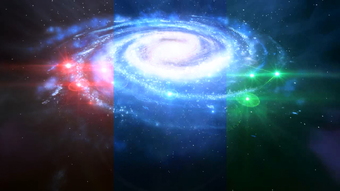 During the battle to retake Earth from the Reapers, the superweapon known as the Crucible may be activated. When Commander Shepard interacts with the Catalyst, the AI that controls the Reapers, the Commander is given the option to destroy the Reapers, take control of them, merge organic and synthetic life together, or refuse to act altogether.

In all cases save the last, the energy reaction required to achieve these options is transmitted through the mass relay network from the Citadel. The relays' element zero cores overload from the massive amounts of energy involved. Every point in space for hundreds of lightyears from the relays is affected by the Crucible’s energy, effectively changing the entire galaxy.

The relays are rebuilt by the survivors whichever non-refusal decision is taken. If the control option is chosen, the Reapers themselves assume the responsibility.

If Shepard didn't rally enough of the galaxy's forces for the final fight, the relays suffer more extensive damage. They explode upon transmitting the Crucible's energy, and subsequent rebuilding afterward proves more difficult for the survivors.