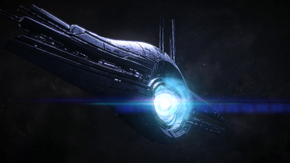 Mass Relays are mass transit devices scattered throughout the galaxy, usually located within star systems. They form an enormous network allowing interstellar travel. Hailed as one of the greatest achievements of the extinct Protheans, a mass relay can transport starships instantaneously to another relay within the network, allowing for journeys that would otherwise take years or even decades with only FTL drives.

For information on launching trans-relay fleet assaults, see the Codex.

Mass relays are built with two long, curved metal "arms" with a set of revolving rings in between them, containing a massive, blue-glowing element zero core. The relays are made of an unknown but incredibly resilient material, the same material that the Citadel is built from. One of the relays even survived a supernova's wake without being damaged. They are 'cold' objects that don't emit heat or radiation, unlike starships, making them difficult to find if their position changes. Some relays, like the Charon Relay, are 'gravitationally anchored' to planets; others appear to be out in space and are carefully tracked.

Mass relays function by creating a virtually mass-free 'corridor' of space-time between each other. This can propel a starship across enormous distances that would take centuries to traverse, even at FTL speeds. Before a vessel can travel, the relay must be given the amount of mass to transit by the ship's pilot before it is moved into the approach corridor. When a relay is activated, it aligns itself with the corresponding relay before propelling the ship across space.

There are two kinds of mass relay, primary and secondary. Primary relays can send a ship hundreds of light years but only link to one other relay, its 'partner'. Secondary relays can link to any other relay over shorter distances. After the Rachni Wars, space faring species won't open a primary relay without knowing where it links to, in case they run into another powerful and hostile species like the rachni. This caused a rift when the turians found human pioneers, ignorant of this Citadel Council prohibition, trying to open any mass relay they could find while exploring the relay network, eventually leading to the First Contact War.

Many mass relays are currently dormant for unknown reasons, though they can be easily reactivated. A Prothean data cache found on Mars led humans to a mass relay encased in ice and orbiting Pluto, previously thought to be a moon called Charon, which the Charon Relay was eventually named after.

Mass relays come equipped with a previously-unknown control function called Dark Switches [1]. These controls allowed scientists from the Systems Alliance to perform their study of a neutron star on the other side of the Kappa Iota Relay, an area not suitable for human life due to lethal radiation in the vicinity of the relay. Through the dark switches, the scientists could control radiation emissions and receive telemetry from their TR-15 Letus probe, which was scanning a neutron star at a previously-unmatched proximity.

A piece of Prothean artwork depicting a mass relay, the Relay Monument, can be found on the Citadel Presidium. It has been interpreted as either a symbol of Prothean vanity, expressing the relays as their means to build a galaxy-wide empire, or possibly as a symbol of galactic unity, which the relay network also embodies. Tali'Zorah nar Rayya claims that after their long voyage through the galaxy, the quarians have also come to appreciate the aesthetic value of the mass relays. 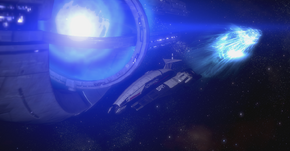 However, the Protheans did have a keen interest in the relays, and managed to crack the secret behind their operation. This enabled them to build the Conduit before they were destroyed by the Reapers.

Commander Shepard also discovers that the Citadel itself is an enormous, inactive mass relay leading to dark space, as well as the control center for all the relays, enabling the Reapers to sever travel between clusters. Its reactivation is, fittingly, more complex than that of an ordinary mass relay, requiring either a coordinated effort by the keepers or manual intervention by a Reaper.

Retrieved from "https://masseffect.fandom.com/wiki/Mass_Relay?oldid=158554"
Community content is available under CC-BY-SA unless otherwise noted.