Matriarch Aethyta is the asari bartender in the Eternity lounge on Illium.

Aethyta is willing to discuss her life with Commander Shepard and how she ended up as a bartender despite being an asari matriarch. She explains that her father was a krogan who fought in the Rachni Wars and Krogan Rebellions, while her mother was an asari commando who also fought in the Rebellions. Her mother kept her commando leathers for "special nights" with her father, and her father always showed off his war scars and talked about how he stomped a Rachni Queen to death on some poisonous world. When Aethyta's father learned that he and Aethyta's mother were once mortal enemies during the Krogan Rebellions, they decided to fight, a battle neither of them survived. During this time Aethyta was about a hundred years old and an exotic dancer. For the rest of her lifespan, she had many mates, including a turian, elcor, and a hanar. She also fathered a pureblood daughter, but her relationship with the mother didn't work out, and Aethyta lost track of her daughter.

Aethyta has very different views on matters than other matriarchs and a very free-spirited, laissez-faire attitude to life. She seems to support the asari becoming more militant and active on the galactic stage, and believes that young asari should help improve society in their maiden years instead of becoming strippers or mercenaries. Her proposal that the asari should try to construct new mass relays was met with ridicule, causing the other asari to "laugh the blue off [her] ass". Realizing that no one wanted to listen to her arguments, Aethyta left Thessia for a less conventional matriarch's life on Illium.

Shepard meets Aethyta while she is trying to fend off Conrad Verner, who is trying to get the deed to the place on behest of an "undercover cop". She is trying very hard not to "slap [Conrad's] ass with a Singularity", until she is rescued by Shepard's arrival. When Conrad explains that the "cop" told him the place is a front for red sand dealers, Aethyta tells him that her bar doesn't sell red sand--and besides, it is legal on Illium as long as the seller has a permit. Shepard can pursue the matter with Conrad. 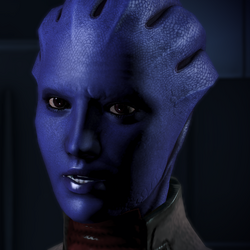 If Shepard assisted Liara in a mission against the Shadow Broker, Shepard mentions a video of Aethyta looking at the picture of Liara. If not, Shepard will speculate that the reason Aethyta is on the Citadel has to do with Liara.

Aethyta confirms that she is in fact Liara's "father" and is watching Liara on behalf of other asari matriarchs, who are suspicious because of Liara's occupation as a powerful information broker, her relationship with Matriarch Benezia, and her friend Shepard's prior affiliation with Cerberus. She also mentions that Shepard's past affiliation to Cerberus is one of Liara's "shady connections".

With a Paragon interrupt, Shepard can explain that they only worked for Cerberus to stop the Reapers, and is no longer with them. Aethyta will then imply a threat towards Shepard, telling them that they wouldn't be anywhere near her daughter if they were still with Cerberus, telling them that "nobody messes with [her] girl". She goes on to suggest that the matriarchs might order a hit on Liara if she got out of line. Shepard can do a Renegade interrupt and aggressively return the threat by saying that's not going to happen. If Shepard has been friendly towards Liara, regardless of whether or not Shepard is romancing her, they add "nobody messes with [my] girl", at which Aethyta is amused and agrees that Shepard is indeed good enough for her daughter.

Aethyta agrees when Shepard tells her that Liara would love to meet her but is not particularly optimistic about a proper conversation.

After talking to Aethyta, Shepard can tell Liara about her. Liara admits that she already knows about Aethyta. Shepard can convince her to speak with Aethyta.

In their conversations, Aethyta and Liara discuss a number of subjects:

If Shepard gets Liara to talk to Aethyta, the matriarch sends a group of asari mercenaries to volunteer their services against the Reapers' invasion.

If Shepard recovers the Library of Asha and gives it to the asari military trainer in Purgatory Bar, Aethyta gives her backing to the trainer about using the texts to increase the fighting ability of the asari.

If Shepard recovers the Biotic Amplifier Schematics from Grissom Academy or buys them via the Spectre Requisitions terminal, the asari in Huerta Memorial that receives them tells her caller to inform Aethyta that she successfully acquired the tech.

Retrieved from "https://masseffect.fandom.com/wiki/Matriarch_Aethyta?oldid=531421"
Community content is available under CC-BY-SA unless otherwise noted.