Mass Effect
“You do not know the privilege of being a mother. There is power in creation. To shape a life… turn it toward happiness or despair….”

Matriarch Benezia is a very powerful asari biotic and spiritual leader among her people. She is also Liara T'Soni's mother, though the two have not spoken in years. When the evidence that proved Saren Arterius was responsible for the Eden Prime attack also proved Benezia was working alongside him, it surprised those who knew her, as Benezia's actions seemed to be completely out of character.

Given her status as a matriarch, Benezia must have lived for almost a millennium. She is renowned and revered as a teacher of religion and philosophy. During the 'matron' phase of her life, Benezia had a daughter named Liara T'Soni. Unusually, Benezia mated with another asari, considered a faux pas in their society. (After discovering their ability to mate with any species, asari consider producing offspring with their own kind as wasteful because "nothing is gained" from pureblooded asari offspring.) Liara tells Commander Shepard that she doesn't know who Benezia chose as her partner; she and her mother never discussed Liara's second parent, and Liara believes Benezia may have been ashamed of her choices. She raised Liara alone - not an uncommon occurrence in asari society - and was amused when Liara chose to study Prothean archaeology, a minor rebellion against her forward-thinking mother.

According to Liara, Benezia feels that the asari should have a greater role in shaping galactic events. She is Saren Arterius' executor and a fellow Binary Helix investor. 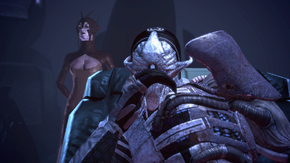 Somehow Benezia discovers Saren's plan to aid the Reapers, and decides to try and guide him down a less destructive path. Benezia gives her followers a choice - only those who are willing have to accompany her. Many refuse because they think her plan is too dangerous, but others, including Shiala, believe in her. With their help Benezia tries to dissuade Saren from his insanity.

But the influence of the Reaper Sovereign is too powerful and Benezia becomes enslaved to Saren's will, along with her retinue of guards and commandos. Benezia's position becomes something between Saren's advisor and his second-in-command. Saren knows Benezia's value; even when she enrages him by bringing the news that Shepard has accidentally used the Prothean Beacon, he restrains himself from attacking her and orders her to ensure the Commander is eliminated.

Through Binary Helix, Benezia funds a secret project on Noveria to breed rachni from a newly discovered egg. They are intended to form part of Saren's army, but when Binary Helix removes the brood from the Rachni Queen's presence, the rachni go rogue. Benezia travels to the lab at Peak 15 to investigate the situation and to access information stored in the queen's genetic memory about the location of the Mu Relay. She is accompanied by an escort of asari commandos. She causes a stir at Port Hanshan when she arrives, telling the authorities she is there as Saren's representative. Lorik Qui'in tells Shepard that "Lady Benezia was dressed for her role. An asari matriarch in a pin-striped suit set tongues wagging amongst the younger male employees... so to speak." 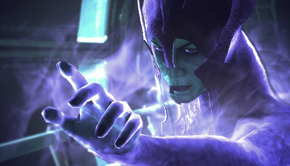 Benezia, aware that Shepard is on Saren's trail, brings geth in crates to Noveria with her and leaves them to guard the garage. She leaves agents such as Alestia Iallis behind and recruits local security including Captain Ventralis to stop Shepard from reaching her. After fighting geth, rachni and Benezia's commandos, the squad finds her waiting for them in the labs beside the Rachni Queen. Even Liara's presence in the squad, if Shepard chose to bring her, doesn't stop Benezia from unleashing her biotics and her commandos against them.

Finally, Benezia, who has used her incredible mental strength to keep a part of her mind free of from indoctrination, manages to break from Saren's control very briefly. She describes the horrors of indoctrination and how it feels to be trapped in your own mind: "beating upon the glass as your hands torture and murder..." She gives Shepard the coordinates for the Mu Relay, though she couldn't tell the Commander any more of Saren's plan, and warns of Sovereign's incredible power before indoctrination begins to overcome her. Benezia manages to tell Liara that her daughter has always made her proud, but finally turns on Shepard and the squad is forced to kill her. As she lies dying, she claims not to see the light promised in asari religion.

After Noveria, Shepard can talk to Liara about what happened, but Liara claims she is all right. She prefers to remember Benezia as she was: a kind, beautiful woman who loved her.

Benezia's unknown bondmate is revealed to be Matriarch Aethyta. If Shepard nudges Liara into speaking with Aethyta and overhears their conversations, it is discovered that Benezia and Aethyta were together for a hundred years until they began disagreeing over what path the asari should take; Benezia wished to do things the smart way but Aethyta simply desired to fight.

After the mission on Thessia, during which Liara learns that the asari government hid a Prothean beacon, which was the source of many of the asari civilization's advances, Liara wonders whether her mother was in on the coverup, and suspects that she regarded her career choice to study the Protheans as "such a joke." EDI, however, suggests that Benezia was motivated by a desire to protect Liara from the consequences should this come to light, and Liara thanks EDI.

Retrieved from "https://masseffect.fandom.com/wiki/Matriarch_Benezia?oldid=447114"
Community content is available under CC-BY-SA unless otherwise noted.