Medi-gel (medical gel) is an all-purpose medicinal salve combining an anaesthetic and clotting agent used by paramedics, EMTs, and military personnel, produced by the Sirta Foundation. It heals various wounds and ailments, instantly sealing injuries against infection and allowing for rapid healing by having the gel grip tight to flesh until subjected to a frequency of ultrasound. It is sealable against liquids - most notably blood - as well as contaminants and gases. While technically its properties make it illegal under genetic modification laws, in this case the restriction is ignored because of the product's beneficial properties.

Despite its ostensible biogenetic nature inferrable from its ban under genetic modification laws, medi-gel proves to be equally useful for the task of repairing synthetic platforms. Lieutenant Girard is quoted in an Alliance News Network broadcast mentioning deploying medi-gel on geth, while Shepard is routinely able to remotely repair and reactivate Legion's and EDI's platforms during the course of the Commander's adventures.

As of 2183, in the field a minor dose of medi-gel can be applied instantly, with the aid of an omni-tool. This can provide a rapid boost to health, especially in an emergency such as a combat situation. A second dose of medi-gel cannot be applied until a 60 second period has passed, which can be shortened with high-grade omni-tools and/or specialist skill from the Medicine talent. As well as this, the effect of each application can be increased by the combined First Aid skill of all nearby friendly personnel (for example Shepard's squadmates Garrus Vakarian and Kaidan Alenko).

Medi-gel's nearly ubiquitous availability means that most buildings, large vehicles, and structures have stocks of the medicine, reducing the need for excessively large personal supplies. This includes the SSV Normandy's medical bay, where an inexhaustible medi-gel supply is freely accessible, at no cost to Shepard. While a moderate carrying capacity for heavy emergency use during a fight can be helpful, once this quantity is exceeded, additional supplies becomes less useful. Refills will usually be nearby, and Shepard can restock their supplies while preparing for a mission at the Normandy or at other locations below. At various shops Shepard can purchase upgraded personal storage that progressively allows more doses of medi-gel to be carried (up to a maximum of 10 units). Alternatively, supplies can be obtained from stocks at the following locations:

While Shepard can use Spectre Training and the Unity revival talent, which does not require medi-gel at this time period, if Shepard is an engineer of the Medic specialization, applications of medi-gel will also revive fallen squad members. As of yet, whether medi-gel can be used generally for more serious injuries, and the methodologies for application if this is possible, are unknown during this time period.

In 2185, the use of medi-gel has changed and separated into an active and passive component. A new automatic self-healing system (see Codex "Body Armor"), managed by the armor suit's microframe computers, uses small quantities of medi-gel when required in order to slowly regenerate your Shepard and the squad members' health after a short period has passed without taking any damage. Alternatively, allies can be revived if Shepard administers a medi-gel unit through the Unity power, enough for a single large dose. Initially the dose merely revives the fallen squadmate, but research allows medi-gel to be used to restore the health and shields of all squadmates (including Shepard) as well. Each time medi-gel is utilized to revive fallen squadmates, one unit is used per fallen squadmate. However, if both squadmates are knocked out and Shepard only has 1 medi-gel remaining, the use of that single medi-gel will revive both squadmates at the same time.

Medi-gel can be administered while Shepard is under fire, and (depending on upgrades) it is capable of restoring Shepard to full health and shields even through light to moderate damage taken during the restore effect, making Unity a valuable "panic" button. This can be done on the move as well, but it should be noted that Unity has a delayed activation and only starts restoring health after a short animation. If Shepard is hit during the casting delay/animation period by certain enemy attacks or powers that cause staggers or stuns, the medi-gel heal will be interrupted before it goes into effect. Once the heal effect successfully begins it can't be interrupted.

Medi-gel can be acquired through opening aid containers or wall-mounted aid stations. Shepard can research or buy upgrades which allow the Commander to carry additional medi-gel units. From an initial carrying capacity of 3 medi-gel units, Shepard can upgrade to be able to carry a maximum of 9 medi-gel units. If Shepard opens a medi-gel container while already carrying the maximum number of medi-gel units, the medi-gel will instead be salvaged for a total of 100 credits. Medi-gel, like Heavy Weapon ammunition, is not refilled between missions and Shepard can only restock by finding medi-gel units during missions. 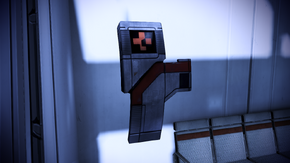 Use during 2186 changed somewhat from the year before, as passive healing capability was limited. During Shepard's campaign to save the galaxy, their health is now divided into bars. Although the current bar only will regenerate after a period with no incoming damage, any bar fully lost will not regenerate automatically. Normally, only way to regenerate these lost bars during a mission is to use a medi-gel; between missions Shepard is automatically restored to full health. Shepard can purchase upgrades increasing maximum medi-gel carrying capacity several times during the campaign, and if the Normandy has a medical officer, there will also be an opportunity to upgrade the amount or efficiency of the medi-gel Shepard carries even further.

Although medi-gel can still be used to revive squadmates, medi-gel is no longer the only means to do this. In addition, a manual revive option will appear when Shepard is facing a downed party member's body in close proximity. The same manual revival also exists in multiplayer. Instead of getting credits for surplus medi-gel found on missions as in Mass Effect 2, Shepard now receives experience for salvaging it. Med-kits contain 2 medi-gels, while med-stations may contain more. Unlike in Mass Effect 2, Shepard's medi-gel stock is replenished to full capacity automatically between missions. Even if both squadmates are down and Shepard is wounded, only one unit of medi-gel is needed to revive both squadmates and heal Shepard.

While smaller squads fight across the galaxy, medi-gel is available in a limited capacity and allows soldiers to revive themselves after being downed. Alternatively one of their squadmates can perform a manual revive while close to their allies, allowing medi-gel to be conserved for critical moments. However, soldiers cannot be revived if downed by "execution" maneuvers (aka sync kills) such as Impale (Phantom, Banshee, Praetorian) or Crush (Atlas, Brute, Scion)—soldiers killed in this way are out for the rest of the mission. Note that if medi-gel is in the process of being used during an extraction the soldier will not be granted Full Extraction until the revival is complete and the soldier is able to move independently again.

Retrieved from "https://masseffect.fandom.com/wiki/Medi-gel?oldid=525324"
Community content is available under CC-BY-SA unless otherwise noted.