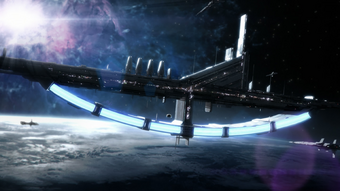 Minuteman Station is an orbital facility operated by the human black-ops network Cerberus, located in the Horse Head Nebula.

Miranda Lawson operated on this base at some point during Commander Shepard's reconstruction. This facility housed some of the Lazarus Project's material: research, laboratories, Shepard's body, and the Commander's backup clone.

This station is where Commander Shepard arrives at after escaping the Lazarus Research Station, to meet with the Illusive Man. It is also where the Normandy SR-2 first launches under Shepard's command.

Retrieved from "https://masseffect.fandom.com/wiki/Minuteman_Station?oldid=450145"
Community content is available under CC-BY-SA unless otherwise noted.