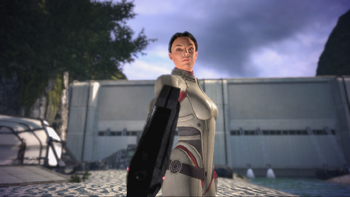 Morality is measured in the original Mass Effect trilogy by "Paragon" and "Renegade" points. Unlike many contemporary role-playing games, such as BioWare's Star Wars: Knights of the Old Republic, that represent morality as a single sliding scale of good and evil, Mass Effect keeps track of the Paragon and Renegade points on separate scales. A good action will not make up for an evil one; therefore, being nice occasionally will not stop people from fearing a killer or remove the reputation of an unsympathetic heel, but nor will the occasional brutal action significantly damage the reputation of an otherwise upstanding soldier. This also means there is no gameplay-driven motivation for avoiding a particular type of action. 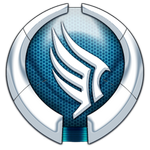 Paragon points are gained for compassionate and heroic actions. The Paragon measurement is colored blue. Points are often gained when asking about feelings and motivations of characters. Paragon or Charm dialogue choices (colored blue in dialogue trees) often lead to people being more open and friendly with Shepard, and can sometimes avert entire battles that would otherwise be triggered.

Shepard starts the game with 3 open Charm ranks. The Paragon scale affects Charm and more as defined below:

After reaching 80% Paragon points, Admiral Hackett will give Shepard the UNC: Besieged Base assignment.

The "free" bonus skill points can be gained again if importing the character for another playthrough. 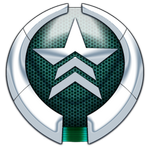 Renegade points are gained for apathetic and ruthless actions. The Renegade measurement is colored red. Many sarcastic and joking remarks are assigned Renegade points. Renegade or Intimidate dialogue choices (colored red in dialogue trees) generally lead to people disliking and even fearing Shepard, and occasionally "encourage" people to tell or give more than they otherwise would. Like with Paragon/Charm options, Shepard can sometimes avert entire battles that would otherwise be triggered.

Shepard starts with 3 open Intimidate ranks. The Renegade scale affects Intimidate and more as defined below:

After reaching 80% Renegade points, Admiral Hackett will give Shepard the UNC: The Negotiation assignment.

The "free" bonus skill points can be gained again if importing the character for another playthrough.

Becoming a Spectre in Mass Effect opens 3 more ranks and gives 1 skill point in both Charm and Intimidate. The "free" bonus skill points can be gained again if importing the character for another playthrough.

1. On Noveria. During the course of Noveria: Lorik Qui'in you will need to speak to Lorik Qui'in, a turian, at the Port Hanshan mezzanine. A mission progression choice enables you to encourage him to testify in a court case. You can choose from either a Paragon or Renegade dialogue option if you have at least 5 points in charm and/or intimidate. Choosing either of these options will give you a reward of 24 Paragon or 25 Renegade points respectively. The conversation will end but you can talk to him again. Ask about a different topic (i.e. Matriarch Benezia), then choose "Another question". The option to convince him to testify will reappear. Repeat this for infinite Paragon and/or Renegade points. This bug appears to exist across all 3 platforms (Xbox360, PS3, PC). This bug still exists in Mass Effect Legendary Edition.

2. During the UNC: Lost Module assignment on Eletania, using the space monkeys.

You are only awarded Paragon points if you retrieve the data module without killing any monkeys.

After finding and searching the monkey holding the data module, save the game and reload. This will result in the Paragon point reward being reissued to the player, despite it already being claimed before the reload. This bug still exists in Mass Effect Legendary Edition.

Note: You only need to save/reload after the initial search. Then all you have to do is double-tap start in between searching the monkey. If you continue to push the A button (360) or X button (PS3) to search the monkey, your Paragon points will continue to climb until you stop.

At the end of Mass Effect, Shepard's morality affects the tone of the ending conversation, regardless of whether the Council was saved or killed. If Paragon, the Presidium will be brightly-lit and the background music will be Vigil's theme. If Renegade, the Presidium will have a darker lighting, with Sovereign's theme playing in the background. The closing shot of Mass Effect always shows Shepard, but varies according to morality choices. If the commander is a Paragon, Shepard is standing empty-handed against a blue-hued planet with an unknown space station in orbit. If the commander is a Renegade, Shepard is standing against a silhouetted planet in a red nebula, holding an assault rifle.

The morality system of Mass Effect 2 works on percentages rather than the total points earned. There is a set number of morality points available in the game. Shepard's current "effective" morality score at any given point is the number of points earned out of the number of points available from the areas the Commander has explored so far. It is possible to have Shepard's Paragon/Renegade scale(s) maxed out, but still not have the percentage required for certain dialog options.[1][2] Due to the morality score boosting effect of class powers, adding/removing points from Shepard's class power using retrain powers will cause a rise/drop in both Paragon and Renegade points in proportion to the greater/fewer number of points in the class power after reallocation.

In Mass Effect 2, there is no separate Charm skill; the success of Charm (blue) dialogue choices is determined directly from the Paragon score instead. Choosing Paragon options will cause the scars on Shepard's face to begin to heal and disappear.

Paragon interrupts usually involve sparing the lives of innocent people or to provide emotional support or comfort. In other cases it is used to call out immoral actions of others.

In Mass Effect 2, there is no separate Intimidate skill; the success of Intimidate (red) dialogue choices is determined directly from the Renegade score instead. Renegade points will also deepen the facial scarring Shepard has after the Lazarus reconstruction.

Renegade interrupts are usually done for combat and involve violent actions towards Shepard's enemies and other people. These can be used to gain an upper hand against the enemy in battle and sarcastic remarks from Shepard.

In Mass Effect 2 Interrupts are an addition to the dialogue system that allow Commander Shepard to take direct, often physical, action at certain moments in conversations.

A Renegade interrupt, for example, may have Shepard physically assault another character, while a Paragon interrupt might have Shepard intervene to prevent one character from harming another.

1. At the conclusion of Samara's loyalty mission, if Morinth is dead, asking Samara if she is okay and then telling her you're not ready to leave will give you 2 Paragon points. You can repeat those two choices and get another 2 points an infinite number of times.

Note: This is a very poor way to gain Paragon points, because Samara must complete her dialogue before you can talk to her again, making it very tedious. It is recommended that the dialogue be skipped with the X button (Xbox 360) or Spacebar (PC) or Square button (PS3).

2. At the beginning of the game when Shepard must escape the station. After the Commander heals Wilson and Overloads the explosive crates, while heading for the exit, Jacob interrupts to explain that Cerberus funded the Lazarus project. During the conversation you may choose "That sounds familiar..." and "I'll never work for Cerberus!" for Paragon points or "You lied to me" and either "What are you after?" or "He'd better have answers." (depending on whether or not you chose "Illusive Man?" when the option appears) for Renegade points. After the conversation, go into cover against the box on the left, then save. Reload that save file and Shepard should be at the same spot, albeit not in cover. As you approach the exit, the conversation will start up again. This process can be repeated, with points carrying over, allowing you to fill both Paragon and Renegade meters. This bug still exists in Mass Effect Legendary Edition.

Note: As Shepard receives only 4 points for each conversation, this can take up to 250 saves per meter with an ME2-import Shepard with an evolved Class Power. Also, the player is unable to see their Paragon/Renegade meter until they leave the station (just before they see the Illusive Man). An easier way to tell how many points towards Paragon/Renegade is by watching the scars on Shepard's face, which will worsen if points are put towards Renegade and heal if points are put towards Paragon.

In Mass Effect 3 interrupts are an addition to the dialogue system that allow Commander Shepard to take direct, often physical, action at certain moments in conversations.

A Renegade interrupt, for example, may have Shepard physically assault another character, while a Paragon interrupt might have Shepard intervene to prevent one character from harming another.

Mass Effect: Infiltrator features a new type of dichotomous morality system. At some moments in the game, Randall Ezno will have the opportunity to make a Paragon or a Renegade decision. This decision will trigger a specific action according to your choice. Those choices are limited regarding the lore but have some influence on the plot.

Unlike other Mass Effect games, Mass Effect: Infiltrator does not keep track of your decisions on a scale. However, the facial scars and biotic colors of Randall Ezno will change according to the choices you make. Renegade choices will turn them red, and Paragon choices will leave them the traditional blue.

Note: This mechanism has no impact on the Bonus Mission.

The developers at Bioware felt that players were too often deciding to make a Paragon or Renegade choice for their character based on a predetermined personality, regardless of the context of the conversation.