Mass Effect 2
Mass Effect 3
“But I want you to know something: my lovers spent their last moments experiencing a pleasure you can't imagine.”

Morinth is an Ardat-Yakshi, an asari suffering from a rare genetic disorder which causes her to kill her mates while joining minds with them. In turn she becomes smarter, more powerful, and deadlier after each coupling. She has spent centuries as a fugitive from asari justice, surviving by her wits and cunning. Her powerful biotic abilities, and talent for dominating the minds of others, have kept her alive despite the odds.

Morinth was born sometime in the 1700s, and was one of Samara's three daughters. At the age of forty, Morinth, like her other two sisters, was discovered to be an Ardat-Yakshi, and was offered the choice of either a life spent in comfortable seclusion, or execution. Addicted to the process of melding, Morinth chose to run, prompting Samara in turn to become a justicar and hunt her down. 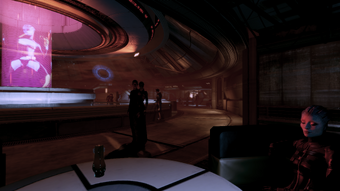 For 400 years, Samara chased Morinth across asari space, as Morinth became more and more addicted to the rush she got from killing her mates. On one planet, Morinth corrupted an entire village and convinced them to worship her. The villagers offered their daughters to her as sacrifices. When Samara arrived, Morinth ordered her worshipers to attack Samara in waves to cover her escape. By the time Samara had killed the worshippers, Morinth had fled and only the youngest children of the village were left alive.

Morinth eventually left asari space and traveled to Illium, but her mother continued to pursue her. Morinth contacts the Eclipse mercenary band, and persuades them to help her escape off-world aboard the AML Demeter. She eventually arrives on Omega, believing she had earned a reprieve. While she's there, Morinth meets a young sculptor, Nef, whom Morinth found irresistible due to her artistic talents. She seduces and murders Nef, not realizing that Samara had picked up her trail with the help of Commander Shepard.

As part of her loyalty mission, Samara asked Shepard to help her find and kill her daughter. Morinth is known to be a cagey soul; direct confrontation is useless as she's likely to have a hundred escape routes planned beforehand. Subtlety must be employed, so Samara and Shepard investigate Nef's death on Omega and put together a daring plan: Shepard would act as bait for Morinth, pretend to be seduced by her and go back to Morinth's apartment. Samara would track them there, and finish Morinth off. 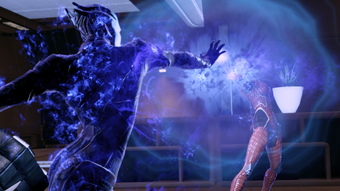 Morinth sees Shepard in the VIP section of the Afterlife Club, her usual hunting grounds. Shepard's actions attracted and excited her, and Morinth invites the Commander to join her at her table. Seemingly finding someone who shares her interests, she decides she wants this person to her own and invites Shepard back to her apartment.

Morinth tries to seduce Shepard when the Commander gets their bearings, only to find Samara enter the room. Mother and daughter battle biotically; both seem evenly matched in power. Morinth sees her chance and asks Shepard to help her kill Samara, claiming she's just as powerful as her mother and could serve Shepard's cause.

Shepard then has a choice to kill either Samara or Morinth if the Commander resisted Morinth's ensnaring seductions. If Samara is killed, Morinth then replaces her mother on Shepard's team. Their strong family resemblance (helped along with Morinth's skill in mimicking her mother) means no one aboard the Normandy SR-2 realizes Samara has been replaced by Morinth; only Shepard knows the truth. 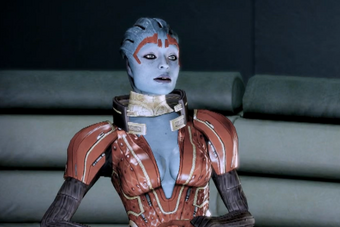 Shepard automatically earns Morinth's loyalty should they assist her instead of Samara in the duel between her and her mother during Samara's loyalty mission.

If Shepard talks to Morinth on the ship, she claims her partners experienced pleasure far beyond that of a normal melding, and expresses her desire to mate with the Commander, as Shepard is unlike any other person she has had before. She even suggests that Shepard is too strong-willed to die if the Commander joins with her and proposes that after they complete their mission that they should celebrate by doing so. If they both survive the suicide mission, Shepard can choose to mate with her as promised; however, Morinth's claims prove to be incorrect and Shepard painfully dies during joining.

If Morinth survived the suicide mission, then when Shepard returns to the Normandy after visiting the Council for the first time after leaving Earth, Morinth will send the following e-mail: 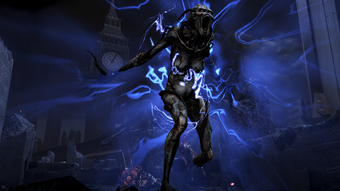 Liara's Shadow Broker terminal may also give access to a series of e-mails Morinth sent to her sisters Rila and Falere. According to the terminal, they were deleted unread.

If Shepard visits the Ardat-Yakshi Monastery on Lesuss, in one of the computer terminals in the complex it is revealed that Morinth's emails to her sisters were caught in the extranet filters and the incumbent Superintendent Jethra deleted those before Rila and Falere had a chance of reading them. This fact confirms Morinth's attempts to communicate with the last of her family.

Morinth can appear during the assault on Earth as a Banshee, an Ardat-Yakshi that has been re-purposed by the Reapers, after Shepard destroys the Hades Cannon shooting down most of the incoming Hammer forces. In combat Morinth behaves like any other Banshee, without any special properties.