The Mu Relay is a mass relay that was lost four thousand years ago. It links to several other relays and is the only relay that links to the Pangaea Expanse and the former Prothean colony of Ilos. The Mu Relay was pushed out of its orbit when a nearby star went supernova but wasn't damaged. The supernova's wake eventually swathed the Mu Relay in hot gas and dust, meaning the relay was impossible to detect as scanners can't pick up "cold" objects like the relays in interstellar space. 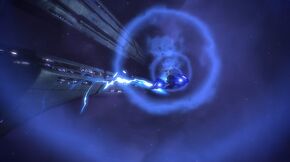 The nebula that enveloped the relay was located in rachni-controlled space. Over centuries, the rachni patiently searched for the relay. Matriarch Benezia explains to Commander Shepard that the rachni are fiercely territorial and seek to close all routes into their space - with the huge numbers of spacefaring rachni, they eventually managed to locate the Mu Relay. When the krogan wiped the rachni out, the location of the Mu Relay was thought to be lost forever. However, the surviving Rachni Queen resurrected by Binary Helix carried the genetic memory of the relay's co-ordinates. Benezia managed to pass them on to Shepard, but not before Saren Arterius had received the data.

After two thousand years of shifting politics and territories, the Mu Relay is now considered to be in the Terminus Systems. Because of this, the Council refuses to send the Citadel Fleet to Ilos as the presence of the fleet passing through the Mu Relay could start a war. The SSV Normandy's stealth system makes her the only starship who can get to the relay safely and in secret.