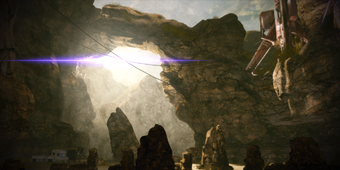 Scans indicate that an archeological dig site on planet Joab (Enoch system, Rosette Nebula [sic]) has been invaded by Blue Suns mercenaries. A Prothean signature has been detected inside the dig site.

Prerequisite: Jacob: The Gift of Greatness

Acquiring Jacob's loyalty mission unlocks the Rosetta Nebula. Scan the third planet of the Enoch system, Joab, for an anomaly. The audio of the anomaly is: "Bastards didn't know what hit them. Coming around for a second patrol. Looking for survivors." Finding the anomaly brings up the following text:

This mission involves fighting your way through several large waves of Blue Suns mercenaries and leaders, so bring squadmates and powers for dealing with shields, armor, and organic/human targets. Squadmates with high health and defensive abilities are also worth considering given the large concentrations of firepower they will be facing. The Blue Suns often clump together, so area-of-effect evolutions of powers will come in handy here.

This is a "low ammo" assignment, with no power cells to grab and the only ammo reloads being those dropped by dead enemies, so plan accordingly. You'll thank yourself for having at least one "large clip" weapon. 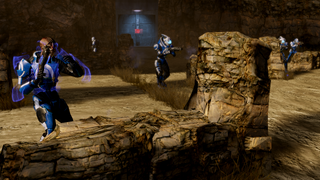 In a cutscene, a Blue Suns mercenary observes the Normandy's drop shuttle landing and goes inside to alert the other Blue Suns. You should first send your squadmates to cover in the rock formation and also take cover yourself. The right-hand side is preferable as it reduces the possibility of being flanked. As soon as you step off the landing pad, Blue Suns Legionnaires and Blue Suns Troopers will exit the dig site, and further waves will soon follow. All of them must be killed for you to be able to enter the dig site, so settle in for a battle of attrition in which the main danger is getting flanked.

Tip: Vanguards and Engineers can immediately stem the arrival of enemies in the initial area: a Vanguard by Charging at the first enemy to exit the building, and an Engineer by spawning a Combat Drone at the doorway. In either case this works because the door closes if the player or a friendly unit reaches it. While not as effective, a wiley Infiltrator can reach the door while being cloaked as well - and, if fast enough, only a Blue Suns Legionnaire and two Blue Suns Troopers will appear. For any other class, using Tali's or Legion's Combat Drone also works.

Once the area is clear, head off to the far left: near some parked vehicles are two crates of element zero; one has 175 units, the other 125. Go through the door to enter the dig site. 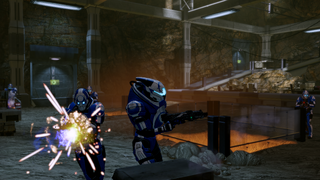 Take cover immediately behind crates as three Blue Suns Troopers attack. A larger group of Blue Suns Troopers will shortly come through the nearby door to reinforce them, so staying in the diagonal cover just inside the entrance is advisable. A third smaller wave of troopers will eventually enter from the door up the ramp in the back, and at that point you'll want to move forward into a more convenient cover position - unlike the first two waves the last wave tends to keep to cover.

Once the smoke clears, within this area there are two personal lockers, with 750 credits each, and a med kit. There's also a terminal with a pair of messages explaining the Blue Suns presence. Up the ramp and through the door on the left there's a personal locker with 2,250 credits. The only other door in that elevated area leads to the next staging area and an impending fight. 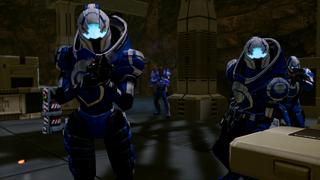 There will be two Blue Suns Troopers among the crates. A Blue Suns Commander will come down from the ramp on the right, though if you're very quick you can eliminate the two Troopers before he appears to pin you down behind the awkwardly placed cover - this will substantially shorten the battle.

There are more Blue Suns Troopers and Lieutenant Locke on the other side of the room, but they will stay put until you come to them. When approaching them, rather than going up the ramp in the center of the room it is better to circle around it: that way you will be less exposed to enemy fire. After the fight, there's a PDA on one of the crates regarding the Blue Suns' plans for the dig site as well as 200 units of element zero. 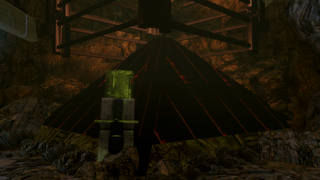 Reading the PDA triggers the N7: MSV Strontium Mule assignment. Not reading it for whatever reason won't be a problem: the assignment unlocks after this one's completion anyway. The last door opens up to a room with a Prothean pyramid and a Prothean video log. Scanning the video log triggers a vision similar to the one Commander Shepard experienced with the beacon on Eden Prime, but Collectors are seen at the end of the vision. Seeing the vision ends the assignment.

Retrieved from "https://masseffect.fandom.com/wiki/N7:_Archeological_Dig_Site?oldid=525937"
Community content is available under CC-BY-SA unless otherwise noted.