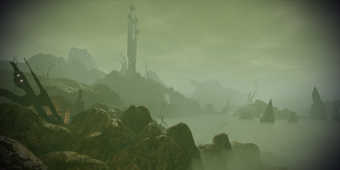 The planet Tarith appears to be home to a Blood Pack mining operation that also hosts a communications relay. Disabling this relay could go a long way toward disrupting the Blood Pack.

“The vorcha are hungry for battle, we're just waiting on the weapons at this point. They'll never know what hit them.”

After the communications relay has been successfully located, the following report is displayed:

In an interesting combination of foes, you'll be facing both klixen and Blood Pack. Bring anti-armor powers such as Incinerate and Warp - these will also help you stop regeneration. The oft-neglected Cryo Blast also finds good use here, because the klixen still have quite a lot of health once their armor is stripped, and should not be allowed to approach to close range. Strip, freeze, and shoot!

Tip: Squadmates are prone to be glitchy in this mission, ignoring or forgetting your commands and wandering off into the fog where it's difficult to keep track of them then unexpectedly teleporting back to your location. Fortunately this tends not to be as much of an issue during the final battle but is something to keep in mind. 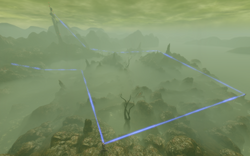 There are beacons present along the path, and activating them will indicate the way toward the next relay. It is worth noting that there are resources and crates located slightly off the intended path. 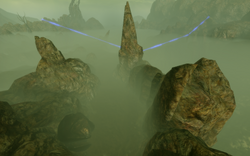 From the landing site, follow the path ahead of you. After a turn, you'll arrive at an open space between the rocks. There you can read the first datapad, pick up a thermal clip and activate a beacon. Follow the path marked by the beacon's blue light and almost immediately you'll arrive at the second beacon. After you activate the beacon, follow the blue beam again and be prepared for an encounter with some klixen. Take them out, continue to the next beacon and activate it. This beacon signals you to turn right. Before you do, pick up 400 platinum from the raw material in the rocky cove to your left.

Continue to follow the blue light beam. Soon the path will fork, and you'll hear the ominous cry of a harvester. It drops a klixen on the right path, which can be taken out quite easily from the left path. After killing the klixen, continue on the left path, picking up 400 platinum from another site of raw material along the way up to the 4th beacon. When you get there, there will be another datapad, read it, grab the nearby thermal clips, and move on. 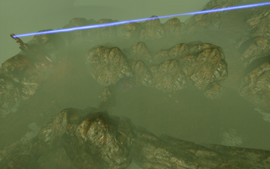 Continue ahead, guided by the blue light, to the next fork in the path. You'll see a harvester make its nasty delivery a little ahead of you, so you'll be prepared for your next encounter. But first, go left and pick up the 400 platinum in the dead end, on the rocks. Back at the fork, head right this time and deal with the three klixen that come to meet you. Activate the beacon, read the third datapad across from the beacon, pick up the thermal clip if you need it, then follow the blue light again. Before you start climbing the path to the left, pick up another 400 platinum and thermal clip in the cove to your right.

Continue up the narrow path to the next beacon and activate it. From here, the path descends again and gets wider. It won't be long before you meet the next wave of klixen, only two this time. Kill them, then activate the next beacon to the right. If you turn right again, up the slope, you will encounter two vorcha and 400 platinum in a box. Return to the beacon, follow the light again and, before you start climbing the steep path ahead of you, turn left to read the fourth datapad. 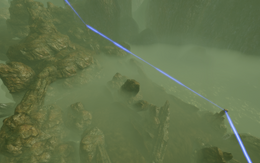 Now climb up to the next beacon and activate it. You'll pass under a natural arch formed by the rocks -- this is a good save point -- and continue along a linear path, to the next open space, where Salamul and three of his vorcha will be waiting for you. Salamul has Health, Armor and a Barrier, and he'll charge at you immediately, so it's a good idea to focus on him first and dispatch the Blood Pack Boom-Squad and the two Blood Pack Troopers after he falls. Tip: Running forward to get into cover probably isn't a great idea here, since Salamul will already be practically on top of you. Instead it's best to back up slowly the way you came, interposing the hillside itself between you and Salamul while you batter him with weapons and powers. Once Salamul goes down you can deal with his vorcha in a more traditional fashion if desired.

After killing your opposition, bypass the Communications Relay to end the mission.

There are a few datapads scattered along the way, which provide insight into what happened to the mercenaries on the planet.

If the associated N7: Blood Pack Base assignment has yet to be completed, you will receive the following e-mail from Cerberus Command after completing this assignment:

Retrieved from "https://masseffect.fandom.com/wiki/N7:_Blood_Pack_Communications_Relay?oldid=517523"
Community content is available under CC-BY-SA unless otherwise noted.