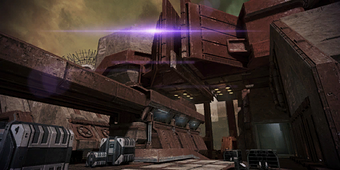 After the mission on Sur'Kesh, Specialist Samantha Traynor mentions in passing that information pertaining to Cerberus activity on Tuchanka has been acquired.

This mission occurs on the multiplayer map Firebase Giant. You will be fighting Cerberus infantry with turret support, so plan your squad accordingly. The main combat zone is very spacious with lots of cover opportunities: bringing mid- to long-range weaponry is advisable.

Travel to the Krogan DMZ to the planet Tuchanka, and select the Cerberus attack site. Select your team and Hackett will brief you on the way down in the shuttle. 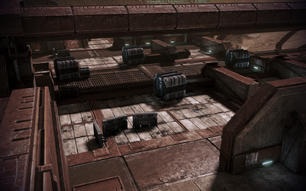 Enemies will already be present at the location when you land, but they will not yet be aware of you. When you walk around the corner there will be three Troopers with their backs to you - make the most of this opportunity. Now get in cover, preferably in a spot where you can see the large open courtyard, as a large wave of Troopers, Centurions and Engineers will now attack.

Keep fighting until Shepard says the console has been secured, at which point there will be no more enemies left and you're safe to collect all the equipment before activating the console. Note: During this first part of the mission, Cerberus will be firing the big cannon up into space to clear a path for its incoming cruiser, causing the ground to shake occasionally and mess with your aim. This problem will cease once you've secured the console.

From where you started, go a little left and through the door. Go past the pile of rubble and in the corner to the left of the crate you will find some junk to salvage (3,000 credits). Return back to where you started and go right, across the courtyard (where the enemies were coming from), and instead of going up the ramp, go to the right. Approach the ammo and you will find some more junk to salvage (+3500 credits).

Climb up the ladder and move toward the console with all the holograms on it. While standing behind the console, look left and you'll see the "Old Grid Schematics" icon needed for the Citadel: Improved Power Grid mission. From that position, to your left will be a med-kit on the ground. Head down the ramp (beyond the hologram counter) directly ahead of you out of the control room, and move into the corner on the right (a bit hidden) for more salvageable junk (3,500 credits). Finally, move around the fallen column and on the other side, pick up the Armax Arsenal Gauntlets. 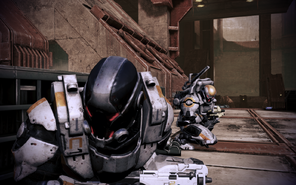 When you're done collecting loot, go back up the ramp, and activate the control console. Cerberus will cut power to the console, so you need to reactivate the power. All of the enemies in this wave spawn from a long distance off and will tend to approach you across the open courtyard, so either the window of the control room or the landing outside the upper doorway both make excellent defensive positions. Note that the only Nemesis in the mission spawns at this point, dropping along with a Centurion from a shuttle onto the bridge-like platform above the main area, and catching her in this vulnerable spot before she manages to take cover down below is a fine idea.

Hold out until the enemies stop coming; after you've killed maybe 10 or more Cerberus will brilliantly realize that something is wrong, declaring "we've got resistance here" and pulling back. At that point head back across the courtyard to where you started, because both the power modules are there. Once you are there, you will find, at minimum, one last pair (a Centurion and a Trooper) hunkered down near one of the power modules.

Once all the enemies are down, you have another peaceful chance to look around for any equipment and credits you didn't collect. When you're ready to continue, shoot the latch off both modules and reactivate them.

Back to the Console[edit | edit source]

Return to the courtyard and fight past the enemies again: this time some Guardians will show up in addition to the enemy types you've already faced. Your goal is to reach the control console again and activate it. Activating it will require you to successfully complete a brief "progress bar", and you will then need to stay alive for a few moments longer (ideally go outside and watch the big guns fire), but otherwise activating the console is sufficient to achieve victory regardless of any enemies left standing, so it's your choice whether to work your way through all the approximately 35 enemies in order to approach the console safely, or try to distract Cerberus and do a surgical strike. An infiltrator can definitely do a quarterback sneak for the win here though.

Tip: Watch out for Turrets sometimes pre-placed in the room right behind the console (it's probably safer to come up the ramp from behind the console rather than blundering up one of the ladders). This is the part of the mission where the Sabotage ability will shine - a sabotaged turret will not only leave you alone, it will tend to mow down enemies.

Once you activate the console, Cortez will tell you that the Cerberus cruiser is starting bombardment. He will then give you the coordinates of the cruiser and the big guns will automatically shoot it down, though if you're outside at the time you can watch them fire and see the explosion. The mission will automatically end once the Cerberus cruiser breaks up in orbit.

Upon return to the Normandy and speaking to Hackett, you will receive +5 Reputation and 10,000 credits. You'll also receive the Krogan First Division War Asset.

Retrieved from "https://masseffect.fandom.com/wiki/N7:_Cerberus_Attack?oldid=498804"
Community content is available under CC-BY-SA unless otherwise noted.