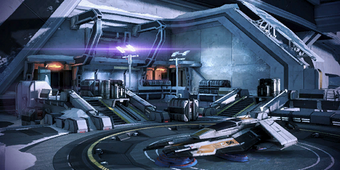 Admiral Hackett has requested assistance with a Cerberus fighter base on Noveria. Land on Noveria to disable the base's defenses.

You obtain this mission upon cementing the alliance between the turians and krogan. Specialist Traynor mentions this mission in passing, which then adds it to the journal.

This mission occurs on the multiplayer map Firebase White (as it looked prior to the Retaliation Pack DLC). You'll find the usual Cerberus opposition, plus some support from synthetic units. Powers for tech bursts are again advisable, as well as some armor-burning capabilities.

Lots of cramped corridors make shotguns really shine on this mission, while the base exterior is of considerable size, leading to distance firefights there. A balance between weapon ranges is therefore recommended on choosing loadouts.

Travel to the Horsehead Nebula and then land on the planet Noveria. Hackett will brief you on the way down, and Cortez will drop you on a small landing platform above the main pad.

As soon as you land you will find Assault Troopers and Centurions already present on the location. Take out the enemies in the upper area: note that they are dropping down from above to attack you and can throw grenades from there. Then move forward and clear the enemies in the lower area. 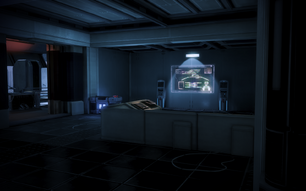 Once you've cleared all the enemies, you'll have one of the few enemy-free periods of the mission, so before activating the control panel, head around and collect all of the items because once you start the next section of the mission it will become difficult.

From where you started, move forward along the same level and around the corner to the left. Head forward and between the doorway and the ladder you can find Spare Parts to salvage (2,000 credits). Go through the doorway and down the stairs, and at the bottom go around to the right for the medical station against the wall and the Pistol Magazine Upgrade on the chairs.

Head around and examine the computer console on the other side of the room. Go down the stairs, turn the corner to the right and salvage the Spare Parts (2,000 credits). Head forward to the console in front of you to salvage a datapad (2,000 credits).

In the corner where the datapad was found high up on the wall are Heating Unit Schematics. Access the medical station on the wall before going outside. Head to the right and at the back of the catwalk you'll find more Spare Parts to salvage (2,000 credits). Turn around and in the middle of the two catwalks is another med kit. Head to the right and in the far corner by one of the red rectangle marked pillars are some more Spare Parts to salvage (2,000 credits).

Once you have collected all the items, return back into the building with the heating unit stabilizers. On the opposite wall to the right of the display, you can find the security console to deactivate. Pick a team member to deactivate the console.

Once the security panel is activated by one of your team members, you will have to fight off a wave of Troopers plus a Centurion and a Guardian with only your remaining squadmate. It's not a large wave but it deploys from all directions, so watch your flanks and be ready to move quickly when a surprise grenade arrives.

When they're dead, you will have to activate the console on the left of the display — if you have not collected the credits and items do so before activating the console, as this is your last opportunity without being harassed. 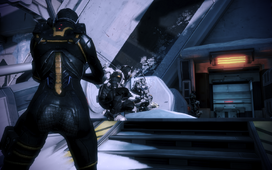 After the activation you need to clear the landing pad of Troopers, two Centurions, two Combat Engineers, and a Nemesis.

You can choose the indoor path or the outdoor path, though note that the outdoor path gives your enemies the vertical advantage as well as allowing the Nemesis more chances to snipe you. An Atlas will be sent as the last unit you have to deal with, but only once all the other forces are cleared, so you'll be able to concentrate on it exclusively. As soon as you kill the Atlas you will be returned to the Normandy to de-brief with Admiral Hackett.

Note: Because the mission will end immediately upon destruction of the Atlas, be sure to grab all the items before that happens.