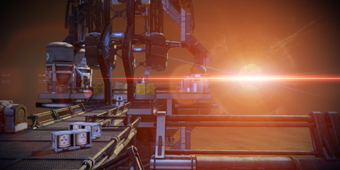 Scans indicate a research station on planet [sic] Sinmara (Solveig system, Caleston Rift) is in danger of eradication by deadly radiation coming from the unstable local sun. If the station's protective magnetic shield were reactivated, it could survive the solar storms.

Scanning Surtur's moon Sinmara uncovers an anomaly. Surtur is the first planet from the star.

Planetary scans indicate that the Sinmara colony is vulnerable to its sun's hazardous solar flares. Malfunction detected in colony's magnetic shield. Shield must be reactivated to avoid exposing colony to unstable solar activity and potential annihilation.”

This mission involves no combat, and there is nothing hazardous except a few explosive crates at the landing zone. Shepard lands without any squad members at the magnetic shield generator.

The only loot in the area is 2,000 units of palladium. It can be salvaged from a broken generator on the walkway to the controls for the shield.

Retrieved from "https://masseffect.fandom.com/wiki/N7:_Endangered_Research_Station?oldid=510482"
Community content is available under CC-BY-SA unless otherwise noted.