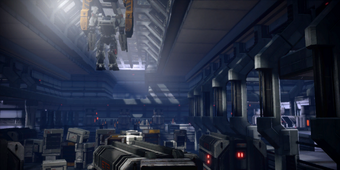 A Hahne-Kedar facility on planet Capek is in a state of high alert. This facility is the source of the VI virus that has corrupted mechs and mech parts throughout the sector. Stopping the production line is key to ending the outbreak.

After completing the previous assignment, Shepard receives a message from EDI about the facility as the possible source of a VI virus that caused the MSV Corsica to crash and led Jarrahe Station's internal VI to kill the scientists aboard. A scan of Capek (Haskins System of the Titan Nebula) will produce the following broadcast:

“Be warned: The experimental mechanics facility is under quarantine. For your safety, do not dock with or land in the vicinity of the facility, without the proper protocols and authorizations in place.”

Launching a probe at the anomaly yields the following message:

You'll be fighting a long stream of mechs, mostly at fairly close quarters. As such, you will want to bring flame and anti-armor powers in your squad, along with anti-mech abilities such as Overload and Disruptor Ammo. Squad members who carry shotguns and assault rifles will also make a difference.

When you land, run forward and get into cover because two FENRIS Mechs and two LOKI Mechs will come out of the facility’s main door. Taking them down isn’t a problem, but the rest of this mission may be.

Note: Rushing towards the door, charging the first mech to exit the doors if Shepard is a Vanguard, or spawning a Combat Drone, be that an Engineer Shepard's, Tali's or Legion's, will prevent any more mechs beyond the first one appearing in the area. In fact, if you manage to spawn a Combat Drone inside the door when it first opens, the door will close and no mechs will come out at all—and when you later open the door the first room will be empty as usual.

Enter the facility and once you are inside, head forward into the room. Inside you will see a med-kit, a wall safe, and a computer, however there is also a LOKI mech walking in the hallway. Don’t shoot it, because your bullets won’t penetrate the glass, and it will explode, shattering it anyway. Grab the Medi-gel and the credits from the wall safe before proceeding.

Warning: When you enter the main room, be aware that you will now face a seemingly endless series of LOKI Mechs, until you reach a certain point. Although YMIR Mechs are being conveyed ominously overhead, they fortunately do not activate.

When you enter, examine officer Gamble's pad, then move up to cover and face the last two FENRIS Mechs on this assignment. Be careful with the LOKI Mechs down in the maze (the downsunk area full of unbreakable crates to the left of the entrance), for they may flank you. Once they are dealt with, grab the eezo on the wall to the right and now your assignment is to get to the end of this maze alive, and that won’t be easy.

When you first move down, take a left turn. You will have to deal with several LOKI Mechs, but at the end of the path, there will be a crate of power cells. Backtrack to the ramp where you came down to the maze, and take the other path. Get your squadmates into cover, and shoot the LOKI Mechs in the wave, then move up to the next cover position. Once you manage to move up past a mech spawn point, you will deactivate it and mechs will begin spawning from further back, but moving up can of course be tricky while a stream of mechs is coming after you.

You will have to repeat this process through the factory. The first corner can be tricky, as the waves are very close together, so moving up will be a problem. However, once you are past the first and second corners, and into the small clear area, all you need to do is hold off about ten more LOKI mechs before they stop. 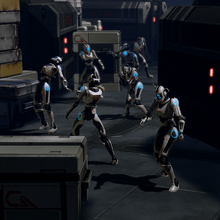 Tip: There is a way to bypass these endless waves of LOKI Mechs, e.g. if you’re going through it on the Insanity difficulty. When the first three Mechs appear, run past them, and the others that you would normally encounter after the first three do not spawn at all. Even if you're not a Infiltrator, a few "stagger" effects on the LOKI's -- e.g. Concussive Shot, the explosion from a downed Tech Armor, should help you slip past unharmed even on high difficulty levels. Alternatively, an Infiltrator can cloak and run through the mechs, ignoring them completely. If you don't mind spending heavy weapon ammo, a few shots from the M-622 Avalanche will stagger and freeze the first wave but not kill them, both preventing them from harming you and preventing more mechs from spawning. Keep in mind that the three LOKI mechs you ran past (to stop the remaining waves of LOKI mechs from spawning) will follow after you and home in on Shepard. Make sure to find safe cover up the ramps at the end and take them out before you go back collect any items you missed.

When the LOKIs finally stop coming, before heading up the ramps, there is a side passage near the ramp that has some more eezo at the end of it. There are also some power cells near the entrance to the area (where Gamble's body is), though be aware that LOKI's can spawn in that area as well if you head there early.

When you have everything, backtrack to the ramps, go up and through the door. Inside are some more ramps, and on the lower level the final crate of eezo, be sure to grab it before moving on. Head up the ramps and you arrive in the factory’s control center. Hack the terminal to shut down the production line, and you are then treated to a cutscene where the squad is running out as the LOKI Mechs' self-destruct procedures are activated. Then, as the squad leaves, they all explode as the Kodiak lifts off from the facility and is seen though the skylights.

Українська
Community content is available under CC-BY-SA unless otherwise noted.