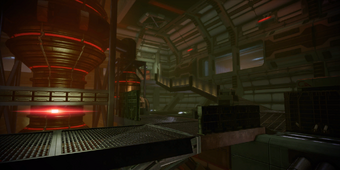 The MSV Broken Arrow is on a collision course with the planet below. The ship's engines must be reactivated before its orbit can be stabilized, and the geth remaining aboard won't make that easy.

The Broken Arrow is in the southeast quadrant of the Nariph system of the Pylos Nebula, readily accessible once the star chart from Baria Frontiers on Illium has been purchased.

This is a very short assignment and you'll be racing against the clock. The only enemies present are geth, so pick squadmates and powers for dealing quickly with synthetics. Energy Drain, Overload, and Disruptor Ammo will all help you here. AI Hacking can also be a particularly good choice, providing you with much-needed distraction. 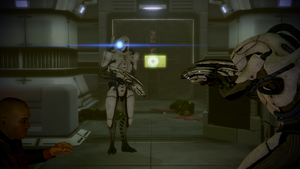 As the assignment begins, EDI will be on the comm talking about how power needs to be restored quickly. She is transmitting a countdown timer to advise you of the remaining time. You have only six minutes to complete the whole mission, so get moving.

Before reaching the first door, there is a pad containing some logs; reading them doesn’t absorb time. Head up to the first door, and like on the N7: Javelin Missiles Launched assignment, bypassing a lock takes time. Once the lock is bypassed, be careful: there are three Geth Troopers in the room. Take care of them quickly, since every second counts. 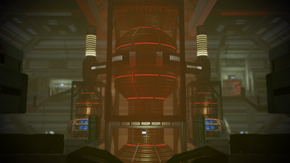 Your objective in the engine room is to restore power, preventing the ship from crashing. This is complicated by the fact that two of the switches to restore power take time to activate, and if you're hit by enemy fire while activating them, you will have to try again. Soon after you enter, waves of geth will begin arriving on the balconies overlooking the room; find cover and start taking them out. Just be careful as there are now Geth Rocket Troopers as well as Geth Troopers.

Once the enemy fire dies down, find the first switch and activate it; it's a short distance behind the cover at the front of the left side of the room. Once you're done with the first switch, head back down to the front of the room, grab the iridium partly hidden behind the cover on the left side, then cross the trench to the right side of the room. Another wave of geth will probably have arrived by now, so you'll likely want to sprint.

Note: There are infinite waves of geth, so you'll need to take advantage of the lulls between waves to promptly move and access the switches.

The right side of the engine room is a mirror image of the left, including the cover at the front near the balconies and the switch a short distance behind it. Follow the same procedure, take out the geth until there's a lull in the enemy fire, then activate the switch. Once both switches are activated, dash to the ramp on the right side and run up to the upper rear area behind the engine. You have to bypass the console at the top of the ramp to reactivate the engines. Don’t worry -- it’s in cover, so enemy fire isn't a problem, but again it eats time, so be fast and accurate. Once the engines are reactivated, you're done.

Tip: This assignment can be almost trivial for Infiltrators, as their Tactical Cloak allows them to ignore all enemies after the first group. Just activate the cloak immediately before hitting each switch, and enemies will ignore you, allowing you to succeed no matter how many geth remain on the balconies.

For completing this mission, Commander Shepard receives this message, titled "To the Normandy: Our Thanks":

The colony is safe.

Retrieved from "https://masseffect.fandom.com/wiki/N7:_Imminent_Ship_Crash?oldid=479161"
Community content is available under CC-BY-SA unless otherwise noted.