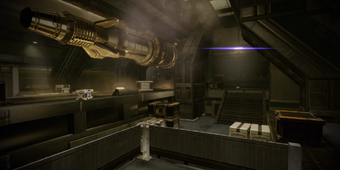 A distress beacon has been detected from a colony on the planet Watson (Skepsis system, Sigurd's Cradle). Javelin Mk.II missiles have been launched from a missile silo on Watson's moon Franklin and are aimed at the colony itself.

This mission is officially available after completing N7: Blue Suns Base and receiving a message from EDI that an Alliance colony on Watson is under attack by batarian radicals. However, it can also be acquired by just scanning the moon upon unlocking the Sigurd's Cradle cluster. When scanning the moon, you will hear the following audio message:

After scanning the anomaly and hearing the distress call, the following message appears:

Scans detect an Alliance colony defended by a Javelin Mk.II missile base. A distress signal indicates that the base is compromised by batarians who have launched two missiles at the Alliance colony. Total destruction of colony is imminent. Zero probability of survivors if missiles strike.

Find the control panel in the Javelin Mk.II missile base. Time of impact calculated: landing party will have 5 minutes to deactivate the missiles after shuttle touchdown.”

Since you will have only five minutes to complete this assignment, the ability to take down enemies quickly is at a premium: select squadmates, weapons, and armor components that will allow you to hit hard and fast. You'll also want to include powers that will help you strip shields from many weakish enemies quickly – the area-of-effect evolutions of Overload and Energy Drain really shine here, as does Squad Disruptor Ammo.

When you start, you are treated to a cutscene showing a batarian preparing to launch the missiles. Note that the countdown timer hasn’t started yet, so saving here would be a good idea. EDI will come over the comm saying that she is transmitting a countdown timer, which will then show that you have five minutes, so get moving!

When you reach the end of the hallway, a squadmate will comment on the appearance of a past battle; quickly face left, because there are four Batarian Troopers there ready for a fight. Use what limited cover you have in order to take them out, and be quick about it, because you don’t have the time. Once they are down, turn around and bypass the door to enter the main room.

Note: Bypassing the door eats up time, so be fast and accurate.

When you enter the main room, there will be three Troopers that you need to worry about. Two are on the elevated center platform in front of you, while the other is off to your right. Make sure your squadmates are inside the room, as they can get locked out if you move too fast. Take out the ones on the center platform first, then focus on the one to the right. Move your squad first to where that third batarian was, then follow. There will be another Trooper at the other end of the elevated platform, but he isn’t much of a threat. From here, put your squad into cover, one near the two crates, and the other on the nearby crate on the center platform. 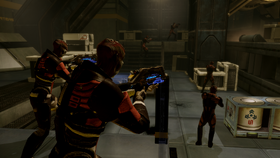 Now a small horde of Troopers and two Batarian Commanders needs to be dealt with on the far side, so staying in cover just to regenerate health and shields is a safer option than normal fighting tactics; but remember you are racing against the clock. Focus on any of them first; while the Commander has more health and shields, he doesn’t have armor, and he is less of a threat without all of his minions. Once they are all down, grab the power cells on the center platform if you have time and run to the lower platform with the locked door. Near to where the Commander was is a crate of refined palladium, but be aware that you can come back to grab both the power cells and the palladium later if you need to. Bypass the door to access the silo control room.

Note: Again, bypassing the door eats up time, so be fast and accurate.

Once inside, there is precious little cover, so kill the Batarian Commander before he does the same to you. Use the small barrel for cover and have your squad charge the Commander, for he will usually focus on Shepard rather than your squadmates. Once the Commander is down, run to the console and, before accessing it (if you have time), open the safe on the right for credits. When you are ready, access the console to hack it and continue.

EDI will come over the comm again and say that there is only one kill switch code remaining, so you must choose whether to protect Alliance interests by saving the spaceport or to save the residential district, and thousands of lives, by destroying the spaceport. However, if you choose to save the residential district, with the industrial area destroyed, the colony will no longer be viable and will have to be evacuated.

Warning: The button mapping for the decision in this mission can be confusing on the Xbox 360, since (A) saves the spaceport and (B) saves the residential area instead of selecting the one you want to save and then hitting (A).

Make your decision quickly, and then watch the results. Neither option gains any additional Renegade or Paragon points, or bears immediate consequences. Before leaving the moon and after deactivating one missile, you can still claim 3,750 credits from the wallsafe next to the console and open a crate of refined Palladium and a box of heavy ammo in the room where the main fight took place, if you missed or ignored them earlier.

Retrieved from "https://masseffect.fandom.com/wiki/N7:_Javelin_Missiles_Launched?oldid=512775"
Community content is available under CC-BY-SA unless otherwise noted.