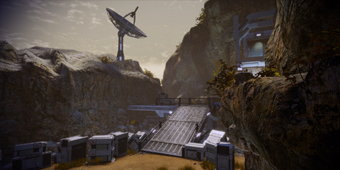 A lost Cerberus operative is believed to be held in an Eclipse base on planet Lorek (Fathar system, Omega Nebula). The operative may have sensitive data that, if lost to Eclipse, could cause irreparable damage to Cerberus.

After recruiting Archangel for your team, a message from Cerberus Command is received on your private terminal:

Alternatively, it is possible to scan the planet to start the assignment before receiving the message. An anomaly will be detected, with a distress call as follows:

After scanning Lorek, the following text is displayed:

For this fairly simple assignment, something to deal with shielded enemies will help, followed by barriers.

Most of the fighting will be done in a medium-sized square room with a lot of obstructive cover, so mid- to long-range weapons and powers for drawing people out should suffice. 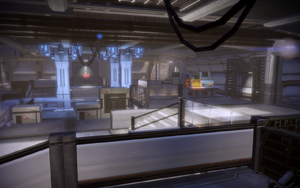 Once you land, don’t head up the ramp just yet, because you will miss a crate of 1,200 platinum off to your right and behind the crates. Once you have it, head up the ramp, turn right, and head toward the door. When you enter, you will encounter some Eclipse Troopers and an Eclipse Vanguard. Get into cover immediately and duke it out.

Once the first wave falls, stay in cover as more Troopers and another Vanguard will come out of the door opposite you. The Vanguard will try to flank you on the right, so make sure you don’t let that happen. When you have defeated the remaining Eclipse mercs, head into the room they came out of for some medi-gel and bypass the safe for 3,750 credits.

Head back into the main room and on the table to your right is a terminal with the interrogation logs of the Cerberus operative. Rawlings didn’t give up the data and was killed in the attempt. When you are ready, get your squad into cover facing the doors that you haven’t used yet, and bypass the holding cell access panel. The second you finish, get into cover as well since more Troopers, a Vanguard, and Morl will make their appearance.

Because you can get killed quickly if you keep out of cover for too long, be sure to pop up and down as necessary. The Troopers and Morl will stay at a distance, while the Vanguard will try and close the gap, so keep an eye on the Vanguard. Morl also has the Combat Drone power, so watch out for it, as he will use it to keep your squad distracted. Basically, keep to cover and you will be OK. 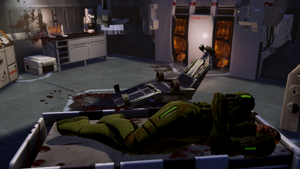 Once the enemies are down, head out the door on the right (the door from which Morl entered), and down the ramps. In the corner you will find a crate of 800 platinum, grab it and then return to the main room, go through the other (new) door on your right, and head down the tunnel to the interrogation room. Bypass the door and a not-so-pleasant scene will greet you. Access the computer in the corner to finish the mission.

When you access the computer, EDI informs you of what the data is and of the potential damage to Cerberus if it was ever circulated publicly. Now, you have three options:

Note: Your credit payout isn’t affected by your decision about where to send the data.

If you send the data to Cerberus, this e-mail (Re: Lost Operative) will be received:

If you decide to keep the intel, this e-mail (Operative Data Filed) will be received:

If you send the data to the Alliance, this e-mail (RE: Encrypted Data) will be received:

Note: At most 7500 credits are awarded (not counting the medigel), regardless what the mission summary says.