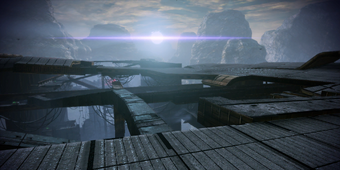 A scan of planet Zanethu (Ploitari system, Hourglass Nebula) revealed the crash site of the freighter MSV Estevanico, which disappeared without a trace roughly a year ago. Any information that could shed light on the ship's fate would be very valuable.

To acquire the assignment, start scanning Zanethu. A distress call, identified by EDI as an anomaly, will be detected by the Normandy's sensors. The distress call reads as follows:

“General distress. User unregistered or record damaged. Nature of incident is not recorded. Assistance is requested.”

These mission notes are displayed upon entering orbit of the planet:

Alliance sources request that all ships keep watch for signs of the missing freighter MSV Estevanico, lost one year ago in this sector. Any data recovered that sheds light on the Estevanico's fate will be rewarded.

Surface scans indicate the presence of a large shipwreck. Signature bears similarities to that of the Alliance merchant freighter MSV Estevanico. Structural integrity is critical. Life support is damaged but capable of sustaining a skeleton crew. Recommend extreme caution.” 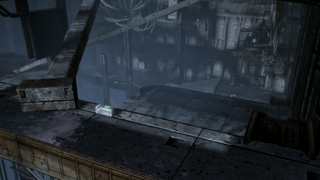 This is literally a linear walkthrough mission, as there is only one path (fairly clear, with a only a few dead end turn-offs) to reach the objective, the ship mainframe. There are a few narrow beams to be crossed, however the game will not allow Shepard to fall off. As you progress, the ship will begin to groan and pop, and start rocking precariously, and with greater frequency.

You land on the far side of the decrepit freighter, EDI comes over the comm warning that the ship may become imbalanced and fall if you explore it. There is a dead end path off to the right with a hanging loose tile that needs to be shot down to form a path further down. Warning: Do not shoot the hanging tile if Shepard is standing directly under the area; predictably Shepard will be crushed and you'll be forced to reload.

Nearby to the left is an apparent bridge. Approaching it, however, will cause the near part to collapse (reportedly causing issues later: see Bugs, below). Proceed further to the left, and walk down the beam. Continue downward on the next beam, turn and head up the ramp that the fallen tile has made. There is a container of iridium at the top. Collect it, and proceed up the beam, and there will be another container of iridium. Take cover and hurdle the fallen beam next to it, then hurdle again at the top of it (correct placement may take a few tries). 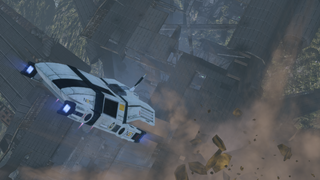 You are now on the far side of the bridge that was apparent on first landing. Continue down the ship, and make a path to the next crossing. As you approach, the ship will give off a few loud pops and groans and rock, settling after a few moments.

Move across, and further down the ship to the next beam. Crossing it will cause another rocking. Head up the ship to the beam leading down to another container of iridium (and more rocking). Walk down the path to the stairs, and head down them. They will fall behind you as you reach the bottom. Turn around and walk across the path the stairs have created to yet another container of iridium. Take the stairs past the container, and head across the path towards the Mainframe. Step up onto the fallen beam, and walk across to reach it (Shepard may get stuck: see Bugs, below). Interact with the Mainframe to play a cutscene and end the mission.

Once you access the Mainframe, you will see a cutscene where Shepard retrieves the data, and the freighter finally falls off the cliff. Shepard is rescued by the Drop Shuttle just in time.

Retrieved from "https://masseffect.fandom.com/wiki/N7:_MSV_Estevanico?oldid=516069"
Community content is available under CC-BY-SA unless otherwise noted.