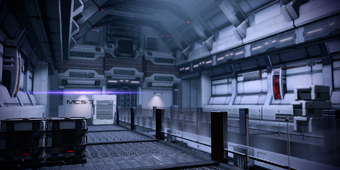 The derelict ship MSV Strontium Mule has been captured by Blue Suns mercs in the Omega Nebula. Cerberus is interested in a particular piece of cargo carried by the derelict ship.

The ship is at Arinlarkan, northwest quadrant.

Bring squadmates and powers good for dealing with shielded opponents, Energy Drain being particularly useful. You'll be facing several tougher "boss" type enemies who are also armored; the Stasis power can be useful for dealing with them or for suppressing other enemies firing from long range.

Caution: For some reason squadmates tend to get lost easily on this mission, taking odd paths to reach you if you order them to rally to you, or charging off to engage enemies on their own. It's advisable to keep them on a short leash and manually order them to where you want to go rather than letting them roam free or relying on the rally/regroup command.

The entire ship has been taken over by Blue Suns mercenaries led by Captain Vorhess and Sergeant Boortis. As the Normandy approaches, it is seen out of the bridge window by the mercs who scramble to positions. Shepard and the squad enter through an emergency hatch on the underbelly of the ship and into the cargo hold.

Warning: As soon as you or your squad moves forward into the first room, you'll immediately be set upon by the Blue Suns, so if you need to activate ammo powers or otherwise adjust your squad, do it before you move at all. Once you're ready to rock, get into cover right away and be prepared because you'll be fighting a large wave of Blue Suns, including Troopers, several Heavies, and a Legionnaire. Keep the enemies at a distance and use powers and gunfire to take them out. Be especially careful of the rockets fired by the Heavies as they seek, deal heavy damage, and stagger you which is often lethal at higher difficulties. There are a few explosive containers that are near to where the Blue Suns come out, so stay away from them and use them against the Suns. Once they are down for the count, head up to the door, take a look at the datapad to the left of it, and proceed.

Note: Rushing towards the door or alternatively, spawning a Combat Drone in the doorway will prevent any more enemies beyond a Blue Suns Legionnaire and a Blue Suns Heavy appearing. In so doing, you will only have to deal with two enemies.

Tip: Spamming the doorway with a heavy weapon right as it opens can greatly reduce the difficulty of this opening fight. The best option for this is the M-622 Avalanche due to its large area of effect freeze. Even opponents that aren't immediately frozen will be staggered allowing you to chain shots until most or all targets are immobilized. This strategy allows you to reach the door while taking minimal damage and prevents further enemy spawns.

Climb a flight of stairs to find a console indicating the airlocks have been sealed, so you can’t go anywhere but up. Head up to the next landing and turn around, on either side of the upper level are some crates, put your squadmates there as there are some Blue Suns waiting for you. Once you have dealt with them, there is another console behind you that will unlock the doors leading away from this central room. There is also another datapad in here.

The central door will lead to the drive core with the Senior Engineer and a couple of Troopers. When you enter the engine room, be careful as there is precious little cover and the Suns have the height advantage. Avoid the railings and the ramps as the Suns can get a clear shot, and move to the far side of the engine room. Here, there is a little cover on either side of the ramp, use it to take down the enemies. Alternately, stay outside the engine room in the hallway and open the door to peek inside and chip away at enemies, retreating and closing the door if you take damage. Once you are done, there is heavy weapon ammo up on the platform to the right, and another datapad where the Lead engineer started. There is also a console here that states that the FTL drive is inoperable.

Of the other two doors, the door on the right of the hub room leads to the bridge if you turn right and the sickbay with some medigel on the left. The door on the left of the hub room also leads to the bridge if you turn left again. On the right is a maintenance rooms with no loot, just a console noting that the FTL drive is was damaged and parts were salvaged to repair it, but run a risk.

Head up the stairs from the left or right and when you reach the top, be prepared for yet another fight. There are two Troopers up here and they will be ready to meet you. Take them down then head to the back of the ship and while the door on your left will be locked, the other won’t be. Inside is the mess hall, two Troopers, and the remains of the crew. Take down the Troopers, you will regret it later if you don’t, and head back to the bridge.

When you get to the door to the bridge, it is locked, so head to the right to access a console to unlock it. To the left is the communications transmitter relay, which is currently inoperative. Once you bypass your way into the bridge, be prepared.

Waiting inside the bridge will be multiple troopers, Vorhess, and his powerful Command Bodyguard. Vorhess only has health and shields on higher difficulties, but his bodyguard has armor as well. It's not necessary to actually enter the room to take them out, just stand outside the door and work them down carefully with the aid of your squadmates' powers (enemies will not leave the bridge). Once they are all down enter the room but be careful as you will be ambushed from the rear by FENRIS Mechs. They will sometimes have trouble entering the bridge making them easy to pick off. There will be two waves of two mechs, then Boortis will come out with his crew.

Note: Your squadmates will also sometimes refuse to leave the bridge as well, so you may have to experiment on how to get them out.

Before you go to engage Boortis and his men, head to the command console and decrypt the command codes for the cargo container by reading the ship's main log. There is also another datapad here. Then head out into the corridor to battle Boortis. He and two Troopers will usually stay at the other end of the long hallway leading to the bridge and shoot from there. Take them out first, and then you only have two Heavies to deal with on the far side of the upper level. The Heavies will stay in cover and only pop out to shoot, so when they do pop up, shoot them and don't get hit by the rockets since they often fire several at once and if one hits and staggers you, you could end up getting chain hit until you die. A Combat Drone if you have one available is a very good tool against Heavies, distracting them and causing them to damage themselves if they fire on it point-blank.

Once they are down, and unless you have missed any Suns, EDI will come over the comm saying that all the Blue Suns have been eliminated and that the cargo is most likely on the ship’s upper deck, behind the door you were previously unable to access. In the cargo hold, you'll find a datapad, case with 2000 units of iridium, a hackable container with a researchable Heavy Skin Weave damage reduction upgrade, and the cargo you came for. Once you have everything, end the assignment, and you are treated to a cutscene showing the Normandy disengaging from the Strontium Mule and moving off.