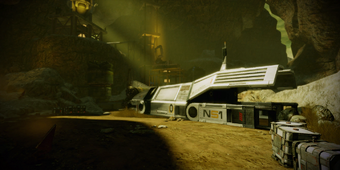 A malfunctioning heavy mech has been left on the planet's surface, its owner having left to complain to the store where he got the mech. The mech has detected a large cache of resources in the canyon, but it needs some work before it can reach and excavate the resources.

Note: If the Firewalker Pack is installed, then in addition to completing Project Firewalker: Rosalie Lost, one also needs to complete Horizon to access the Talava system.

This mission is acquired after scanning Taitus, the fourth planet in the Talava System (Caleston Rift).

“Repeat. There's a piece-of-crap mech on this planet's surface. If you think you can get it to work, you're freakin' welcome to it *static* -welcome to it.”

Surface scans detect one YMIR Heavy Mech signature matching an unknown (possibly pirate) registration. Mech appears to be disabled but broadcasting a looping message. Message does not appear to be a distress signal. Resource scans indicate large quantities of mineral resources available but obscured behind walls of dense stone.”

Since combat in this mission involves only two varren, the only preparation note is that if you'd like to experiment in absolute safety with an unfamiliar weapon, power, or squadmate, now's your chance. 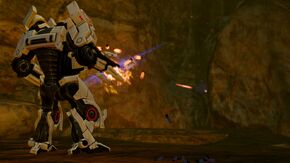 Upon landing on Taitus, a datapad will reveal that the YMIR Mech was bought from Harrot on Omega and apparently has power problems. Because of this, the previous owner left a trail of power cells that lead to some valuable resources at the other end of the canyon. Grab the first power cell and insert it into the mech and it begins its walk. It will shoot through the canyon wall and keep moving. Follow the mech picking up power cells when necessary to keep it moving.

About halfway through the mission you will encounter two varren that are hovering over a power cell. They are very easy to eliminate, so do so, and then retrieve the power cell they were hovering over. When you reach the end of the canyon, insert the last power cell and get away from the mech. When it destroys the final wall, its arms explode, then the rest of the mech self-destructs as well. Head into the chamber the YMIR revealed and recover the resources in it to end the mission.

Retrieved from "https://masseffect.fandom.com/wiki/N7:_Mining_the_Canyon?oldid=510459"
Community content is available under CC-BY-SA unless otherwise noted.