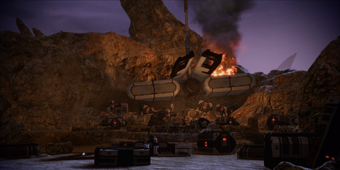 Scans indicate the presence of a wrecked merchant freighter on planet Neith (Amun system, Eagle Nebula). Movement was detected on the planet's surface, but no signs of organic life.

A scan of the planet Neith (4th planet/Amun system/Eagle Nebula) reveals the presence, and location, of a wrecked merchant freighter. Although there is confirmed movement on the surface, it lacks any organic lifesigns.

These mission notes are displayed after scanning the planet:

You will want to bring flame and anti-armor powers in your squad, along with anti-mech abilities such as Overload and AI Hacking. A squad member with a sniper rifle can be helpful in the early phases; one with a shotgun or assault rifle in the later phases.

Upon exiting the shuttle, you will receive an advance warning of possible incoming sand storms from the northwest and to proceed with caution.

To start searching, turn around to find a crate of platinum. Off to the left, near the second ramp, are some damaged mech part, salvage them for some credits. In the middle of the opening area where the shuttle landed is a datapad with the Ship's Status Report. The report indicates that the ship's VI went out of control and the Captain locked it out. Before proceeding closer to the crash site, there is another set of damaged mech parts that are salvageable to the right.

From here the path splits in two. To the right is another crate of platinum, while the left side has the Navigator's Log and another platinum crate. When you have them all, proceed into the large area in the shadow of the crashed freighter. There is another datapad with the ship's evacuation order, a med-kit, some damaged mech parts, another crate of platinum and the ship's shipping manifest. Apparently the ship was transporting a massive number of mechs.

Up on the plateau where the distress beacon is located you will find some power cells and the security report. Apparently the mechs aboard the ship were activating and self destructing. Head over to the transmitter and deactivate it. 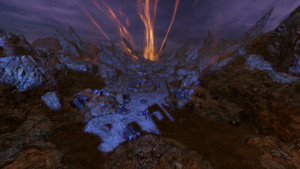 When the transmitter goes offline, you will be attacked by LOKI Mechs. Get into cover and begin to fight your way back to the shuttle. The Kodiak's VI will recommend immediate evacuation, so get moving. Note: As you get closer to the shuttle, your visibility will decrease as the sandstorm picks up. The Kodiak's VI will inform you of the developing conditions, and continue to recommend evacuation.

If you remain at the transmitter for the first wave of mechs to arrive, there will be precisely 10 LOKI mechs and then no more will attack you until you advance. Additional mech spawn points lie ahead of you, and when you get close enough will produce more waves. Note: As soon as you advance past a mech spawn point, no more mechs will appear from that location; this fact can be used to your advantage.

Tip: Before hitting the transmitter which triggers the mechs to spawn, send your squadmates to cover positions back towards the direction of the shuttle. This means your party will already be safely in cover and ready to fight once the mechs appear.

Tip: It can be helpful to equip the Stimulator Conduits leg armor for this mission to help you sprint to cover or the shuttle more quickly.

Pick either path to go along, it really doesn’t make that much of a difference. The YMIR Mech that was listed in the Shipping Manifest will also show up, about the time you've committed yourself to one or the other path. However its LOKI friends will make it difficult to focus on the YMIR entirely. The best thing is to have one of your squadmates, or yourself, focus on the YMIR exclusively, and have the other two focus on the LOKI mechs. Also use Unity every time a squadmates falls, as you can be overwhelmed very quickly. Note: It is possible here to reduce the intensity of the fight greatly by starting down one side first, then when the YMIR shows up, double back and take the other path instead. Occasionally, you can slip by with this method without having to fight past the YMIR at all.

Once the YMIR is down, keep moving towards the shuttle taking cover where you need to, destroying more LOKI Mechs, then moving again. Once you are close enough, make a beeline for the shuttle. The assignment ends within seconds of your pressing the button on the side of the shuttle, so you can dash the last few yards under fire if necessary.

Combat Strategy: There is a way to get the YMIR mech focused on Shepard when it is time to take it out by the Destroy Every Mech method and not get cut to ribbons. As you are moving up, and the waves of LOKI mechs keep spawning further back, take the right path. About half way along the right path on the right side of the path there is dirt path that goes sharply up into a small rock enclosed area. A sharp rock boulder / spike will be on your left at the top of the enclosed area as you look down at the shuttle / YMIR mech area. You may encounter a few LOKI mechs walking from the shuttle area but the YMIR mech will come alive and start towards Shepard. Place your squadmates into cover/kneeling in the back corner of the rock enclosed area. If you place Shepard behind the sharp rock boulder and peek out to the right, the YMIR mech will try to walk against the hill side and shoot at Shepard behind the sharp rock boulder but the bullets and rockets will only hit the sharp rock boulder and not Shepard. You can then lean out / throw powers around the boulder to safely chip away at the YMIR mech without it being able to get to you. If you haven't killed all of the 180 LOKI mechs yet required for the Destroy Every Mech method, take care after you kill the YMIR mech as the LOKI mechs will still spawn until you reach the magic 181 mechs killed and the mission ends.

On the ground in the area there are various datapads, most of which contain short recorded messages. There are also a couple of datapads containing information about the ship.

“Captain, short-range sensors just went offline and I’m locked out of helm control. The VI is reporting malfunctions all over the ship.”

“Attention all hands! We are on a collision course and losing systems fast. Report to the escape pods immediately! This is not a drill!”

“Trenton, we’ve got a problem in the cargo bay. Marcus says the mechs in the containers are activating and self-destructing. Go check it out.”

Retrieved from "https://masseffect.fandom.com/wiki/N7:_Wrecked_Merchant_Freighter?oldid=518958"
Community content is available under CC-BY-SA unless otherwise noted.