N7 HQ is a BioWare website featuring stat-tracking and gameplay data for Mass Effect 3 that launched on October 11, 2012.[1] N7 HQ allows players to view their progress in Mass Effect 3's single-player campaign and multiplayer mode. From the N7 HQ main page, players can view their Profile, Challenge Awards, and Inventory in multiplayer, as well as the Mass Effect 3: Galaxy at War system and any Achievements earned in the game.

As of June 6, 2013, Mass Effect 3: Datapad, an app for iOS devices which allowed players to interface with Galaxy at War, was removed from the App Store.[2] Its functions were replaced by N7 HQ.

From the profile screen, you can track your ranking and challenges, and set your in-game rewards; view unlocked characters, inventory, and leaderboards; and explore other players' profiles and learn how they operate. You can access the profile screens of players from every platform via the scroll button on the top right side.

The default page displays your general data such as your name, rankings and banner details. From this page you can also view other profiles to know more about your friends or top players. By typing a profile name into the search field and launching the search, you will access all of that profile's information.

Note: You can hide your profile by changing your privacy settings. The data of hidden profiles will not be accessible to others' games.

This welcome page displays general information on the profile:

The page also shows the recent evolutions on your challenges. It gives the challenges recently achieved by the player, and challenges that are almost completed. It displays every challenge bar, distinguishing between major (gold medal) and minor (silver medal) ones.

This page displays the level of completion of all Challenges available in Multiplayer. It also displays the number of times you've completed a specific Challenge as well as your unlocked banners.

Like the Challenge system, this page is divided into three categories (General/Aliens/Weapons) to facilitate navigation.

This page also displays the list of all previous Weekend Events and Weekend Challenges and their completion status. A gold medal is awarded for each completed event while the medal remains grey for a failed or missed special week-end. When an event is missed, it is impossible to get its medal.

This page features a list of the unlocked characters on your profile and the current level of each class. By clicking on the different characters, the page will display their current skill tree. This function allows you to compare your builds with those of other players.

This page features a list of the available equipment and characters for Mass Effect 3 Multiplayer acquired via the Store. The page classifies the items by their rarity level and displays the level of each of those unlockable items:

The Leaderboards page displays the rankings of your account, also comparing them with those of other players. The first table shows your N7 ranking, the second your Challenge Ranking. The Promotion ranking is not displayed in these tables.

For each Ranking, the displayed profile is compared with the worldwide ranking and the country of that user's ranking. If possible, the rankings of the profile’s friends are also displayed.

This page features a list of all the Achievements available in the single-player campaign and in Mass Effect 3 Multiplayer. The page is divided into unlocked achievements and other ones. It also displays the achievements included in the DLC pack, whether you have unlocked them or not.

The Codex section includes a portion of the primary and secondary Codex entries of the Mass Effect franchise.

This page features a list of the banner(s) that you have unlocked for your profile. You can change the banner that will be displayed in your N7 HQ account and in the lobby of a new Multiplayer game.

Note: You must sign out of Mass Effect 3 Multiplayer for this change to take effect.

This page allows you to review and to improve your Effective Military Strength (EMS) in the Mass Effect 3 main campaign. From your internet browser, you can either act on your Military Strength or your Galactic Readiness. 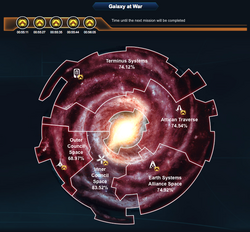 In the Galaxy at War mode, users can view their Galaxy at War Readiness Rating as well as deploy five fleets to various locations in the galaxy for an increase in readiness, according to the length of the mission in the associated theater. Once a fleet is deployed, the player must wait out the duration of the mission, after which the reward, a boost to Galactic Readiness Rating, can be collected.

Since June 6, 2013, this browser-based galactic map replaces the mini-game contained in the Mass Effect 3: Datapad app. This version of the game is a simplified version of the mini-game, as it does not include the same reward mechanism: the credits and upgrade mechanisms have been removed. The fleets' characteristics have disappeared, and the reward, in terms of Galactic Readiness, is now fixed at its highest level. The duration of the longest mission has also been shortened and the fleets may no longer become temporarily unavailable after their missions.

Up to five fleets can be deployed at a time, with missions taking place across five galactic regions, each with three independent locations. Each mission location requires either a short, medium, or long duration to complete and increases Galactic Readiness accordingly:

There are fifteen mission locations, each contains a set of briefing and debriefing information. They are listed below by mission duration, with the shortest missions listed first.

Pinnacle Station: Command Center – Formerly a military training Facility, Pinnacle Station has been repurposed as a command and control center for Council forces.

Noveria: Research Labs – The frozen world of Noveria is home to some of the most advanced research facilities in the galaxy.

Camala: Indoctrination Camp – The batarian colony of Camala is now controlled by the Reapers, who are using it as a spawning ground for more Reaper forces.

Gembat: STG Outpost – A Salarian STG outpost based in the former krogan colony of Gembat performs recon and sabotage operations against Reaper forces.

The fleet drew off enemy fire to prevent the outpost from being discovered.

Menae: Moon Base Firax – Palaven's largest moon is the spearhead of the turian effort to retake their homeworld from Reaper forces.

Cherk Sab: Refugees – The gas giant Cherk Sab has the only He-3 fuel system in the system, making it a chokepoint for refugees fleeing the Reapers.

An Alliance strike force disrupted hostile activities in the sector, giving Cyone a chance to resupply.

Thessia: Asari Fleet – Fast mass-relay access to the Citadel makes Thessia a vital military asset, and most of the asari fleet is stationed there to protect the homeworld.

Ket'osh: Sensor Array – An ancient quarian colony abandoned during the geth uprising, Ket'osh has a massive sensor array that tracks ship movements across all nearby sectors.

An Alliance strike team extracted key intel and Prothean resources from the area.

This page displays the "online" War Assets that you have unlocked in your Mass Effect 3 single-player campaign. These bonuses will increase your military strength, allowing for an easier final mission.

Retrieved from "https://masseffect.fandom.com/wiki/N7_HQ?oldid=513668"
Community content is available under CC-BY-SA unless otherwise noted.