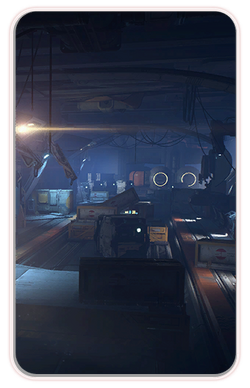 A krogan transport containing an essential seed vault was stolen from their colony on Elaaden.

This loyalty mission starts automatically upon completion the prerequisite.

Speak with Hark at the greenhouse Edit

Hark is in New Tuchanka on Elaaden. He has tracked the stolen ship to one of Elaaden's moons. Pathfinder Ryder has to use the Tempest, because krogan ships don't have stealth capability. Ryder also learns it was possible for the Nexus exiles to steal the ship.

Nearby Hark, there are several Genetically Altered Plants that can be scanned for +10

When you tell Hark "We're ready," the mission on the moon will start, and the opportunity to change the loadout will be given. Note: During loyalty missions, manual saving is disabled for the duration of the mission.

Defeat the defender Outlaws to get inside the facility.

On a container on the ground level just inside the facility is a datapad.

Upstairs is a container that can be looted.

In the first room are Aroane and some of his crew. That means William Spender is involved, and that's how Aroane got the codes to steal the ship, Drack concludes.

Aroane runs away, leaving his raiders to fight Ryder.

. There is a container next to a locked gate and two more containers when Ryder drops down into another corridor.

Later on, you will have to clear the passage by lifting some rubble. The krogan botanist Vorn then reveals himself over the comm. He was in the ship when it was stolen and is now hiding in a container, but it seems the bandits have found him. At the same time, the transport ship is powering up. Drack decides that the team should go for Vorn first and then the transport ship.

Ryder continues along and it takes some jumping to get to Vorn. There is a container on an elevated section before the large staircase section. There is another container that can be looted right before the door Ryder has to open to Aroane.

On the way to Vorn, Ryder will run into Aroane again. Before he retreats, he says to Drack that stealing the ship just was the first step to destroy everything he cares about.

Upstairs Ryder will find the shipping crate Vorn is in and can let him out.

Drack will burst through a wall and another battle will take place. Eliminate the hostiles.

There is a Broken Hydra that can be scanned for +10

next to the elevator console.

After taking an elevator up to a platform, Vorn is ordered to prevent the docking clamps holding the ship from being released. Defeat several raiders and their two Hydra mechs.

There is a large orange container next to the elevator that can be looted.

After the battle, use the console where Vorn is standing. Then Aroane sneaks up behind Vorn and holds a gun to his head. Vorn surprises him with one of his botanic experiments - it's dangerous for all except krogan. Ryder will have to decide whether there is a use for Aroane or not.

With all house cleaning done, Ryder takes off with the transport, and lands safely in New Tuchanka.

Drack is naturally satisfied, but also wants to nail Spender to the wall.

Although the mission is technically not yet complete, its major objective - specifically Drack's loyalty - is satisfied. Ryder is awarded +73 AVP

Ryder now needs to return to the Nexus and settle things with Spender.

After Ryder enters the Common Area, the Communications Officer calls on the comm saying he has decrypted the transponder. There is incriminating evidence against Spender.

Use the Security Footage terminal to access the evidence and inspect it in more detail.

Speak with Drack on the Nexus Edit

Drack has been waiting for the moment to put a stop to Spender for more than a year. At the meeting with Foster Addison and Tiran Kandros, Spender tries to make himself look like a victim, but no one believes that. The evidence indicates he has caused the Nexus great damage.

Ryder can decide whether this mess is on Addison or Spender. Ryder also decides whether Spender should be sent to prison on Nexus or be exiled.

Drack makes Addison promise to support the krogan when they want to negotiate for better terms with Nexus. "We will do it right this time", she says.

The mission then completes and Nakmor Drack: Knock 'em Down starts.

If Spender is exiled:
After proving that William Spender was conspiring with Nexus mutineers, you exiled the assistant director of Colonial Affairs to a brief life on the run from his former associates.

If Spender is jailed
After proving that William Spender was conspiring with Nexus mutineers, you sent the assistant director of Colonial Affairs to jail, knowing he'd never survive life on the run from his former associates.

Retrieved from "https://masseffect.fandom.com/wiki/Nakmor_Drack:_A_Future_for_our_People?oldid=515381"
Community content is available under CC-BY-SA unless otherwise noted.