Nakmor Drack [3] is an aged and grizzled veteran, even by krogan standards. He has spent over 1,400 years causing a ruckus in the Milky Way, wearing the title of soldier, mercenary, and at times, pirate. When the loyal, but stubborn, veteran was given the chance to join his clan on a voyage to Andromeda, he had no choice but to sign up. Doing so would present him with a whole new galaxy of stuff to shoot.

Drack is the grandfather of Nexus Superintendent Nakmor Kesh[4]. He also has extensive prosthetics, and synthetic organ replacements as a result of catastrophic incidents he endured during his centuries-long life.

Drack is awoken with Morda to deal with mutineers threatening the Nexus. With the uprising crushed due to krogan help, he accompanies the clan leader into a meeting with the Nexus leadership to claim their promised seat in the council, and bears witness to Jarun Tann's refusal to honor the deal.

Kesh attempts to placate Morda, who has been demanding blood. Two of the krogan present, Kaje and Wratch, concur with the clan leader. Drack intimidates both to hold their tempers: he punches Watch in the chest when the latter suggests wrecking then rebuilding the Nexus, deeming it a wasteful gesture, and he glares at Kaje until the other one looks away. As for Morda, Drack recommends she listen to his granddaughter as she's more familiar with the two-faced councilors.

Drack's reputation for hardheadedness is legendary among Clan Nakmor, to the point that Kesh's stubborness is attributed to his blood.

Nakmor Drack first meets Pathfinder Ryder on Eos at a kett base, just as the Pathfinder team is surprised by Drack throwing a killed wraith through a window. Drack is wary of people from the Andromeda Initiative because the Nexus leadership reneged on their deal with the krogan. After Assistant Director William Spender duped the krogan into putting down the Nexus uprising, the Nexus leadership denied responsibility and refused the krogan their unauthorized compensation: to have political representation in Nexus affairs.

Despite Drack's estrangement with Nexus personnel, he is still fond of Vetra and is courteous to her if she is in Ryder's party. Since the krogan exodus from the Nexus, Drack and the other krogan have started their own colony. Drack has been doing his part to secure the krogan colony by taking out kett bases. 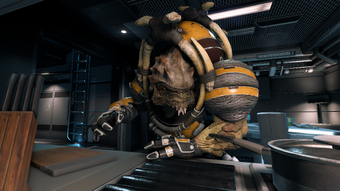 After the activation of Eos' Remnant vault and environment has become more hospitable, Drack can be found again fighting kett at an outpost site earmarked for future Initiative development. Once the kett have been dealt with, Drack tells Ryder he's impressed at their feats, though he still sees them as green as a drell when it comes to Heleus affairs. Concluding that they work well together, Drack formally joins Ryder's crew. He takes up residence in the Tempest's kitchen, though he can be found in other places of the ship at times.

When Ryder asks him what's wrong with him, Drack explains that his arm, side, hip and part of his leg have been replaced by prosthetics and that he has a thread balancing across his spine to reduce strain. He shares some of his history, recalling how he fought through the Krogan Rebellions only to watch his culture disintegrate before making a living as a mercenary and later a pirate but despite all of this combat experience, he was still taken out by "one idiot with a pack of frag grenades".

Received upon returning to the Tempest after activating the remnant vault on Eos:

Received as part of obtaining Elaaden: A New World:

Retrieved from "https://masseffect.fandom.com/wiki/Nakmor_Drack?oldid=518929"
Community content is available under CC-BY-SA unless otherwise noted.