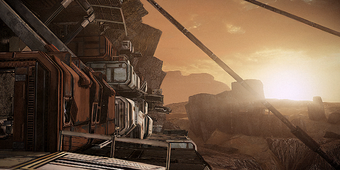 Ann Bryson's dig site on Namakli is under attack. Rescue her and find out what she knows about the Leviathan artifacts.

The journal entry for this mission is automatically acquired upon landing on Namakli.

As with the mission on Mahavid, you'll be fighting the entire ground force roster of the Reapers: this time, with air support. However, the proportion of enemies are slightly different.

Anti-armor and incendiary abilities, along with Power Combos to create fire or biotic explosions, should be considered a priority. Shielded enemies are rare, therefore de-emphasize shield-stripping in favor of other forms of crowd control.

In the shuttle Shepard and the squad discuss the intel found up to this point. Cortez notes that if Ann is on the planet, she has not been responding to hails. However, Reapers are present and swarming around the dig site. Cortez drops the landing party off, but then gets chased off by Harvesters.

Warning: The Harvesters circling overhead will take shots at you. This only occurs in the first half of the level before reaching Ann Bryson. These bombardments are not related to an actual Harvester spawning that you can target and is instead an "environmental hazard" of the level. Taking cover will not protect you from this, even staying inside structures will not necessarily keep you safe as the Harvester attacks possess a significant area of effect that can penetrate light cover or thin walls. There is actually no way to guarantee you won't get hit or even killed once the bombardments start but having Defense Matrix as a bonus power to instantly restore your shields can be a life saver. The bombardments appear to start targeting you after you linger in a particular area too long, so keep moving. Once the bombardments start your only real chance is to stay in a safe spot inside an enclosed area, wait until you hear the sound of the Harvester volleys hit your location, and then make a break for it. If you can reach a new area fast enough, you will "refresh" the timer on when new bombardments start again. Once you reach Ann Bryson, you're in the clear from this very annoying hazard.

Head to the Elevator Edit

Move ahead on the walkway: Ann will contact you, saying she will come to meet you. Shepard insists she stay where she is: they'll come to her. Ann will then give you a nav point for an elevator. Go into the structure and keep moving forward. The ladders to the side lead to the same areas as the forward path, so choose whichever way you prefer.

Eventually, you will encounter Cannibals by some explosive barrels. Dispose of the Cannibals however you wish, and be sure to pick up the AT-12 Raider shotgun off the body in front of the structure the Cannibals exited. Move into this same building and pick up the SMG High-Velocity Barrel on the left side.

After you exit the structure you come to a dead end. Turn around and climb up the ladder. Kill the Husk waiting for you, then find a place to jump across to the rocky area. The bridge control panel there needs to be fixed: one of your teammates will be volunteer themselves to do so while you fight off some Husks.

After the Husks are defeated, the squad member will have finished with the controls just in time for the arrival of a Banshee. Take care of her, then move on. You'll encounter a few more Husks on your way to the elevator. Remember to keep pressing forward with alacrity and stay near cover, because the Harvesters will increasingly bombard you. Note: If the bridge is up, you can run for the ladder instead of dealing with the Banshee. 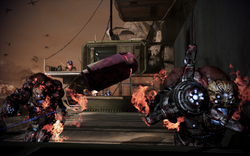 When you activate the elevator controls, the car comes down part of the way but is blocked because of damage to the elevator shaft. Shepard contacts Ann for a workaround--she activates a door one level up and gives a new nav point. Go into the building next to the elevator to find an SMG Recoil System on a counter. Keep moving up and around the wreckage. You'll encounter more Cannibals accompanied by two Ravagers--be careful, as one of the Ravagers is on a balcony above you and may be able to target you behind low cover. In the building on the right is data that can be salvaged (2500 credits).

After taking care of the enemies, climb up the ladder and you'll find a Med Kit in the building. There may also be a couple Cannibals that were too shy to come out in the preceding fight. There is an ammo-pile on the left wall if you need it. Move out onto the balcony from which the Ravager had been shooting. At the end of it, Shepard will comment about the way being blocked: simply turn around and climb up the ladder, then navigate around the debris. After you've done so, Ann will contact Shepard about the Reapers pinning her team and her down. Keep moving forward and dispose of the occasional Cannibals that try to stop you.

Eventually you'll be able to climb onto a structure and move to the rock wall to which the buildings are attached. There are many Husks and a Brute that attack soon after you do so. You may want to take advantage of the explosive barrels that litter this area.

Move forward and a platform will collapse in front of you. Move back to the structures and keep going. You'll encounter Cannibals and a Marauder backed up by a Harvester. Do enough damage to the Harvester, and it will fly off, leaving just the Cannibals. After taking them out, pick up the Med Kit on the path by the corner of the building. Note: the Harvester appears after the other enemies - if you remain on the high ground to kill all the other enemies before it appears then it will appear out of nowhere and ambush you just as you are crossing the open ground. That can be deadly on higher difficulty levels, so it is suggested you cross before engaging the Cannibals.

There is a Ravager on the balcony facing you as you turn the corner. Take it out now or move into the building away from its fire, take out the Cannibals inside, and move forward to shoot at it from the side while it is distracted by your squad. Along the wall between the first entrance and the one where the Ravager is/was located is an Assault Rifle Omni-Blade. Near the exit there is also Damaged Machinery to salvage for 2500 credits.

Move forward and a squadmate will yell about the elevator. Don't activate it just yet: there's a Med Kit and Data to salvage (5000 credits) inside the building just before the elevator controls.

Activate the elevator and you will finally meet Ann Bryson. She's the only one of the team left. She'll explain what she knows about Leviathan and the artifact she found. They move toward the artifact which is emitting energy toward the Reaper creatures surrounding it. Ann appears to lose control and begins speaking in a deep voice not her own. Shepard's squadmates shoot the artifact to destroy it, breaking the spell. Shepard calls Cortez for a pick-up and orders Ann to run when she sees the shuttle. Time to kill more Reapers.

First there are Cannibals and a Harvester. The Cannibals are scattered and not too much of a threat, and Cortez needs the Harvester gone to come in safely, so make it your priority. Tip: It will die fairly quickly if you have any sort of grenades: using them sets off a chain reaction of exploding barrels. Likewise, hitting it with any sort of fire or biotic explosion will tend to create a massive chain reaction.

Marauders begin to accompany the Cannibals after the Harvester dies. You do not need to defeat the enemies to complete the mission, just head to the shuttle. Warning: Be careful about heading to the shuttle too quickly, as the spawning Marauders can actually drop right on top of you dealing heavy damage and leaving you totally exposed. On the way to the shuttle there is a Med Kit on a desk to the left. In the building to the right of Cortez, there is another Med Kit and salvageable data (2500 credits), though the open area leading to the construction can be difficult to traverse without eliminating the enemies first. If you manage to reach the building unscathed, however, there is ladder allowing for safer and almost direct passage to the shuttle from there.

On the shuttle, Ann does not remember being enthralled. She wants to contact her father right away, but Shepard breaks the bad news about her father's death.

Retrieved from "https://masseffect.fandom.com/wiki/Namakli:_Leviathan?oldid=518712"
Community content is available under CC-BY-SA unless otherwise noted.