Nassana Dantius is an asari diplomatic emissary assigned to the Citadel, found seated in the Embassy Lounge at the Presidium.

Nassana will ask for Shepard's assistance to rescue her sister in 2183.

Nassana will not talk to Shepard while the Commander is in the lounge, but sends a brief message to the SSV Normandy later, asking for a discreet meeting. She needs the help of a Spectre for a personal mission. Nassana's sister, Dahlia Dantius, has been taken prisoner by a band of mercenaries who are holding her for ransom. Nassana broke Citadel diplomatic regulations and paid the ransom, but Dahlia has not been returned. She has tracked her sister to Sharjila in the Artemis Tau cluster and she begs Shepard to bring her back.

After raiding the mercenary base, Shepard discovers that, far from being a captive, Dahlia was actually their leader and she was blackmailing her sister. After being confronted with this, Nassana abandons her facade and thanks Shepard for eliminating a potential embarrassment. If Shepard finds Sharjila independently, Nassana is almost disappointed that she did not have the chance to manipulate the Commander. If Shepard tells Nassana that she could have just told the truth to begin with, to which she concedes, but explains that "we have trust issues in my family".

Nassana then offers a payment. Even if Shepard refuses her blood money, Nassana will pay anyway, claiming she does not like being in debt to anyone and suggests Shepard to give the money away if the Commander's conscience is bruised.

Shepard can also Charm or Intimidate her for a bigger payout. Nassana agrees, saying that any fool can come up with credits, but she can place Shepard on the buyers list for prototype asari mods. This gives Shepard the Armali Council armory license. 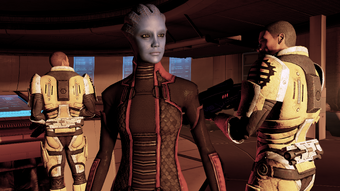 Nassana is encountered on the planet Illium in the partially built Dantius Towers. Her unscrupulous business habits, namely killing anyone that threatened her reputation, has made her the target of Thane Krios. Aware that her life is on the line, she has sealed herself in the penthouse of Tower One and employed Eclipse mercenaries to protect her. She orders the salarian workers in the Towers to be purged by LOKI Mechs shortly before Shepard arrives.

When Shepard reaches her, she confronts Shepard and believes that the Commander is the assassin. If Shepard had dealings with her in 2183, she will state that the situation is ironic, as Shepard killed her sister and now is going to kill her. If Shepard tries to explain that she is mistaken, Nassana does not believe that the Commander would decimate her security forces just to find the assassin. As she continues her accusations, Thane, who has surreptitiously infiltrated the office through the air ducts, kills the remaining guards then assassinates Nassana at point blank range.

Thane mentions to Shepard that "she believed that one of her sisters would kill her", implying that Nassana may have more siblings other than Dahlia.