Mass Effect 2
Nef was a human teenager living on Omega. She was killed by the Ardat-Yakshi Morinth, who seduced Nef and then murdered her by melding with her.

While hunting down Morinth, Shepard and Samara can help Nef's mother, Diana, in investigating her daughter's death. Her mother implores them for help, claiming that no one on Omega seems to care that her daughter was murdered, and that she is desperate for assistance from whoever will aid her.

In the process of helping Diana, Shepard and Samara can search Nef's room for evidence. In her room, they find that Nef was an artistically talented teenage girl who, though lonely, reserved and shy, possessed incredible creative ability. She had been offered money for her sculptures by several art galleries.

Diana informs Shepard and Samara that, all of a sudden, her daughter's personality began to change, and that she had become infatuated with an asari on Omega (Morinth). Despite her warnings and worrying, Diana says that Nef began to spend entire nights out at the Afterlife Club, having gained access to the VIP section by slipping Jaruut's name. Nef sometimes did not return for days, and until news of Nef's death reached her mother, she had no way of knowing that her daughter had died. 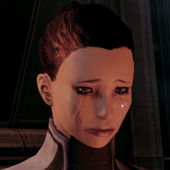 The asari enthralled Nef by appealing to her artistic and musical interests. Morinth also addicted her to Hallex, a drug, to make her more impressionable and prone to suggestion. Despite this, initially Nef expressed doubts to her diary over their relationship on the basis that Morinth was a girl like her, suggesting she was uncomfortable with her sexuality, and an alien, which added a xenophilic streak to the relationship. Finally, when Nef was at her most vulnerable, Morinth joined minds with her, thus killing her.

If Commander Shepard helped Nef's mother, and chose to aid Samara in killing Morinth, the Commander will receive a mail from Diana. She states that even though her daughter is gone forever, and that what little Nef had was wrongfully taken from her, she is happy to see that they have both been avenged, and that Morinth has paid for her crime.

If Commander Shepard chose to aid Morinth in killing Samara, the Commander will still receive the mail from Nef's mother. Everyone believes that Morinth died.

Retrieved from "https://masseffect.fandom.com/wiki/Nef?oldid=516523"
Community content is available under CC-BY-SA unless otherwise noted.