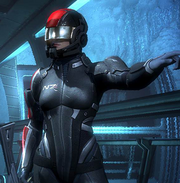 Nemesis is an unlockable specialization class for the Adept and Vanguard. A biotic who uses their abilities to damage and weaken their foes, the Nemesis gains bonus damage to all biotic abilities, and is granted improved versions of Lift and Warp. Improved Lift increases its radius, and improved Warp increases its radius and damage done per second.

Note: Choosing the Nemesis specialization as the Vanguard alters a base class passive. The pistol and shotgun damage increase is 1 percentage point higher for each rank after the first, resulting in a total bonus of 15% instead of a regular 10%. The same is NOT true for the Shock Trooper.

Retrieved from "https://masseffect.fandom.com/wiki/Nemesis?oldid=516577"
Community content is available under CC-BY-SA unless otherwise noted.