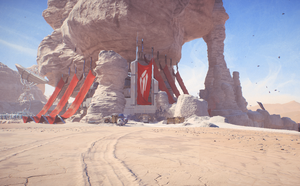 Led by Nakmor Morda, New Tuchanka was founded on Elaaden by the krogan who departed the Nexus in the wake of the rebellion. It is named after the krogan's homeworld, Tuchanka.

The colony was built directly after the departure of the krogan from the Nexus. It was located near a sinkhole to mitigate the harsh conditions of the planet and was built with prefab materials from the Andromeda Initiative that were taken by the krogan when they left the Nexus. For food supplies, the colony relies on the greenhouse, handled by Vorn and his assistant Hark, where the plants grow faster than on the irradiated Tuchanka.

Depending upon Ryder's choice about the fate of the stolen Remnant Drive Core, the Elaaden Outpost can be created next to New Tuchanka. It is the only unnamed Initiative golden world outpost.

The director of colonial affairs, Foster Addison, thought that the krogan were definitively lost for the Initiative in the aftermath of the Nexus Uprising. With Ryder's deal with krogan, the colony can retroactively be called an Outpost despite a specific leadership among the krogan.

The following Priority Ops missions take place or are acquired at New Tuchanka:

The following Allies and Relationships missions take place or are acquired at New Tuchanka:

The following Heleus Assignments missions take place or are acquired at New Tuchanka:

The following Additional Tasks take place or are acquired at New Tuchanka:

Retrieved from "https://masseffect.fandom.com/wiki/New_Tuchanka?oldid=521316"
Community content is available under CC-BY-SA unless otherwise noted.