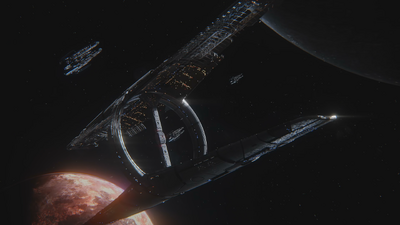 ANALYSIS:
Headquarters of the Andromeda Initiative, the Nexus is a massive space station designed to anchor the returning arks, process resources, and support colonists before their departure to new worlds. All new arrivals must pass quarantine.

The Nexus is intended to be the hub of the Andromeda Initiative once the project reaches the Andromeda galaxy. Taking inspiration from the much larger Citadel, the Nexus contains features comparable in form and function to those found in the Milky Way station and houses the command echelons of the project. 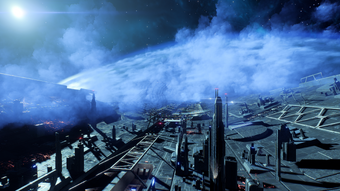 At launch, the Nexus resembles two Wards of the Citadel joined together at the base. Upon reaching Andromeda, construction is due to commence on the station in order to give it a Presidium-like central torus and another Ward-like superstructure. The arks are to dock with the station on its central support column to provide it with extra power and storage.

The Nexus was activated a year before the Hyperion arrived in Andromeda. With its original leadership decimated in the Scourge disaster shortly after arrival, and unable to establish contact with any of the First Wave Arks, the staff on board began having disputes, this eventually led to a rebellion against the Nexus leaders. After this conflict, the crew on board who had rebelled were banished from the Nexus and labeled as "Exiles". There has also been reports of terrorist activity and sabotage from other crew members who did not agree with the senior staff on topics of survival within the Andromeda Galaxy. The krogan who were originally part of the Nexus team had been told by the Nexus leadership that if they stopped the rebels they would be given more control over what happens on the Nexus, however they were not given anything for their efforts, and so virtually all krogan left to form their own colony.

Furthermore, the first two attempts at establishing outposts both ended in disaster. Run-ins with the hostile kett, and lacking the resources and manpower supposed to be provided by the Arks, coupled with food shortages, the standing Nexus leadership were forced to cease all construction on the Nexus, and stretch their dwindling food stores via rationing. 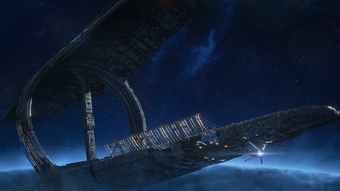 Approximately fourteen months after the Nexus' arrival, its inhabitants began to give up hope of rendezvousing with the other arks, but that all changed when Ark Hyperion arrived and docked with the station. Despite the Nexus leadership's lack of faith in the success of Pathfinder Ryder, the station itself slowly began working to revitalize the Initiative, culminating in the successful settlement of Eos and subsequent first contact with the angara. The angara have received reports of the Nexus' encounter with the Scourge prior to this, but due to their disastrous first contact experience with the kett they did not choose to immediately offer aid.

Located in the Militia Office: