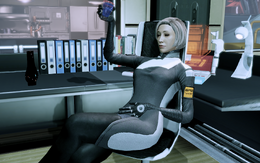 Doctor Chakwas would like a bottle of Serrice Ice Brandy but hasn't been able to find one.

Speak with Doctor Chakwas on the crew's quarters deck of the Normandy SR-2 and ask if there's anything she needs. This reveals that she lost a bottle of Serrice Ice Brandy when the original Normandy was destroyed. She has sought to replace it but hasn't been able to find one.

A bottle can be found sitting on the bar next to the bartender in the upper level of the Afterlife Club on Omega, where it can be purchased for 1000 credits; at the Dark Star Lounge on Citadel; at Ratch's shop on Tuchanka; or purchased from the drink kiosk at Eternity on Illium after speaking with the bartender. Upon giving the brandy to Doctor Chakwas, Shepard can opt to have a drink with the doctor. The assignment is considered complete in the journal, but the experience and upgrade are only awarded after drinking with Doctor Chakwas. 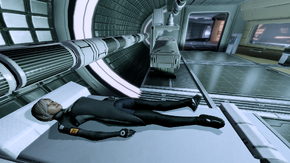 If Shepard does choose to have a drink with the doctor, she reminisces about Corporal Richard L. Jenkins, claiming that soldiers like him are what makes the Alliance great, and Cerberus doesn't have such soldiers. If Kaidan Alenko died in the original Mass Effect, she will reminisce about him as well. She will also reveal that she is working with Cerberus because of Joker, who will not admit that he needs help with his Vrolik syndrome.

Afterwards, when leaving the medical bay, Shepard will humorously sway in a drunken stupor for a few minutes due to the potency of the drink. Doctor Chakwas can be found passed out on a nearby bed.

Doctor Chakwas will later comment on the drinking incident. Depending on Shepard's dialogue choices, she may suggest making a yearly tradition of drinking a bottle of brandy and promises to pay for the next one.

Retrieved from "https://masseffect.fandom.com/wiki/Normandy:_Serrice_Ice_Brandy?oldid=466747"
Community content is available under CC-BY-SA unless otherwise noted.