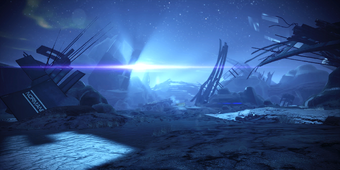 The Alliance has found the wreckage of the SSV Normandy on the planet Alchera. They have asked that a monument be placed on the site and any sign of the remaining 20 missing crew members recovered.

The Normandy's crash site is available automatically from the Cerberus Network as free DLC. When the DLC is installed, after acquiring the Normandy SR-2, Shepard will receive an e-mail from Admiral Hackett titled "Normandy Crash Site Located":

Travel to Alchera, Amada System, Omega Nebula, to start the assignment. These mission notes are displayed after scanning the planet:

“Scans confirm the wreckage of SSV Normandy on the planet's surface. No life signs or mechanical activity detected. Stable landing zone located amid the crash site.”

Exploring the crash site is a solo mission; there are no hostiles present. As you explore the map, Shepard will experience flashbacks of different areas of the SSV Normandy according to which areas of the wreckage the Commander is walking through. Dog tags will show up as a shining object in the distance and are relatively hard to miss as the pick up option will appear well before you see the dog tag itself. Four dog tags are in crates around the map, and may be retrieved by breaking the crate.

Notable features include the still-intact Mako, the destroyed Galaxy Map amid the wreckage of the CIC, a section of the port armour plating with "Normandy" still visible, the sleeper pod compartment, a section of the cockpit, and an upright escape pod.

Near the remains of the Galaxy Map, a data pad can be found that belonged to Navigator Pressly, who was killed during the attack on the Normandy. It details his initial disdain for having so many aliens onboard, though the third and final entry notes how his opinions have changed and how he would gladly give his life for any of the aliens. You can also find Shepard's lost N7 helmet. If found, it will be located on the desk in Shepard's quarters.

At some point during the mission, you must place a monument on the grounds. After placing the monument, regardless of collecting the other items, you may return to your shuttle to complete the mission.

If you have found 16 of the 20 dog tags, and are looking for the remaining 4, then they will be in the fragile crates scattered amongst the debris field. You must break the crates open to find the remaining tags.

There are a few places where Shepard will pause for a minute and experience a flashback to the SR-1.

Three journal entries can be found on a datapad near the CIC; the flashback of Navigator Pressly plays after examining it.

After the completion of the mission, provided that at least one dog tag has been recovered, Shepard will receive this e-mail, titled "Normandy Crash Site Data Received":

There are four possible outcomes for this assignment, depending on whether Shepard found all dog tags and whether his/her N7 helmet has been recovered. Note: It is possible to return to the planet to recover the missing dog tags and/or the helmet, however, upon leaving the planet, the 'Mission Summary' screen will not be displayed.

All dog tags and N7 helmet recovered: A monument has been placed at the last resting place of the SSV Normandy on Alchera and the families of all missing crew members have been notified of their ultimate sacrifice. Shepard's lost N7 Helmet was recovered.

All dog tags recovered; N7 helmet not found: A monument has been placed at the last resting place of the SSV Normandy on Alchera and the families of all missing crew members have been notified of their ultimate sacrifice.

Not all dog tags found; N7 helmet recovered: A monument has been placed at the last resting place of the SSV Normandy on Alchera. The Alliance still seeks any sign of the remaining crew members lost when the ship was destroyed. Shepard's lost N7 Helmet was recovered.

Not all dog tags found; N7 helmet not found: A monument has been placed at the last resting place of the SSV Normandy on Alchera. The Alliance still seeks any sign of the remaining crew members lost when the ship was destroyed.

Retrieved from "https://masseffect.fandom.com/wiki/Normandy_Crash_Site_(assignment)?oldid=513839"
Community content is available under CC-BY-SA unless otherwise noted.