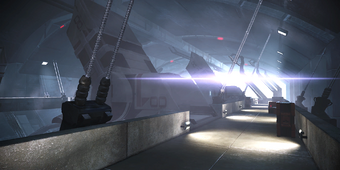 The Council has received reports of geth interest in the corporate research colony of Noveria. The Council needs to know why.

This mission is acquired after Shepard is given Spectre status and reports to Dock 422. Udina will say that Anderson is stepping down as the commanding officer of the SSV Normandy and that the ship is now commanded by Shepard. If you ask, Anderson will say that Noveria is trouble and always has been. Anderson warns that Spectres are the only Council agents Noveria will respect; he tells Shepard to take care when going there.

Go to Noveria in the Pax system, of the Horse Head Nebula cluster. Noveria is a private world outside of Citadel Space. Only Spectre authority allows your visit, and even then it will not be well tolerated by the businesses and other "interests". 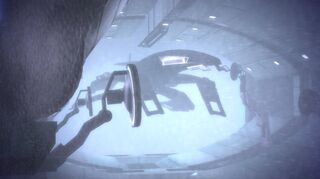 When approaching Noveria, apparently you are not on the scheduled arrival list. Noveria's traffic controller warns that the ship is being tracked by defense systems. Only after Joker invokes Citadel business, saying that he has a Council Spectre aboard is the Normandy allowed to land, and even then the controller threatens to impound the Normandy if her identity is not confirmed upon arrival.

When you leave the Normandy head around the hangar, where you will run into Captain Maeko Matsuo, Sergeant Kaira Stirling, and a turian who will block access into Port Hanshan. They will react with suspicion upon hearing that Shepard is a Spectre, and Matsuo will move to hold your weapons, citing a strict policy against carrying firearms in Port Hanshan. Depending on how forcefully Shepard reacts, the two sides will prepare for a shootout. Even if you agree to co-operate and hand over your weapons, Gianna Parasini will interrupt via intercom and tells Matsuo to stand down. Apparently, Shepard’s identity has been confirmed, and Matsuo is compelled to allow the Commander to enter the port.

When you reach the second landing and pass through some scanners and an alarm goes off. Parasini tells you not to worry, since they are only weapons detectors. She finally introduces herself as the administrative assistant to Administrator Anoleis, the chief of the port. Parasini can offer basic information about the facility, but explains that Anoleis must approve any request to leave Port Hanshan. If you ask about any unusual visitors, she will admit that Matriarch Benezia arrived recently. Shepard can have a short conversation with Liara if she is part of the landing party, before stepping into the elevator and going to the plaza.

On stepping out of the elevator, you now have free access to most areas in Port Hanshan. The only places off-limits to you at the moment are the garage, the Synthetic Insights offices, and Anoleis' office.

To talk with Anoleis, simply request Gianna to unlock his office for you. On the far side of the main area you'll find the garage entrance, but you'll need a garage pass. If you attempt to leave without one, you will be stopped by an ERCS guard. Lilihierax, the turian near the garage entrance, can provide information about Noveria (and the earliest opportunity for acquiring the Noveria: Peak 15 mission) but will not give up his garage pass.

If you want to buy or sell equipment, the hanar Opold is the merchant to go to. It will even give you the Noveria: Smuggling assignment if you want it. Other interactions are available at the Port Hanshan Mezzanine, and you may get the chance to participate in Noveria: Espionage if you so choose. There's also a hackable terminal at the office-like space on the upper level of the mezzanine, and it yields the assignment Doctor at Risk. You can also disable the security to the SI office from the same room: this will come in handy if you choose to take up an offer from Lorik Qui'in downstairs.

Getting a Garage Pass Edit

Now, your only real concern at the moment is on getting a garage pass so you can resume your pursuit of Matriarch Benezia. The other interactions are there for additional credits/experience/morality points/story development, but strictly not necessary. Proceed in whichever way you see fit.

The shortest method of obtaining a garage pass is by ratting out Opold. When you obtain the hanar's package in Noveria: Smuggling, present the evidence to Anoleis. He rewards you with credits and a pass.

The second method requires some verbal maneuvering and even some combat. "The greater the risk, the greater the reward" holds true here. Accept the mission Noveria: Lorik Qui'in.

Whichever way you obtain a garage pass, proceed to Noveria: Matriarch Benezia for the rest of the Noveria story arc.

Retrieved from "https://masseffect.fandom.com/wiki/Noveria:_Geth_Interest?oldid=449421"
Community content is available under CC-BY-SA unless otherwise noted.