View source
watch 02:30
Dead Cells Final DLC - The Loop
Do you like this video?
Play Sound
1/3

Alternative journal entry:
Lorik wants you to break into his office and recover files from his computer.

If you haven't obtained a garage pass yet on your first conversation with Administrator Anoleis, Gianna Parasini whispers this mission to you on your way out of the office.

Otherwise, you can still obtain the mission from the turian himself on the Mezzanine.

Note: If after acquiring the mission from Gianna you obtained a garage pass by presenting Opold's package, and you did so before talking to Lorik Qui'in and receiving his assignment, you will be unable to complete this mission, and the respective entry will remain incomplete in your journal. However, receiving the assignment from Lorik Qui'in and then leaving Port Hanshan with the help of Opold's package will allow you to complete this mission any time later.

A single Assault Drone can be disabled before the mission by hacking the "Security Control Unit" (average Decryption) in a room up above the one where you meet Lorik Qui'in. Upon successful completion you will receive a message "Synthetic Insights Security Disabled". Alternatively, for maximum experience points you can fight the drone and then return later to gain the XP for disabling the security as well.

The fighting in this mission mostly involves organic opponents, including some with sniper rifles and others with biotic and tech powers. Crowd control abilities that can instantly disable organic opponents will come in handy.

Lorik Qui'in has a proposition that will benefit you both. He explains that Anoleis is proving to be a corrupt administrator. As the administrator of one of the port's tenants, Lorik does have a garage pass to offer you, but in return he needs access to the evidence against Anoleis that Lorik has hidden at the Synthetic Insights office. You can consider this offer, or opt for another solution.

If you want Lorik's pass and agree to help him, he will give you access to the Synthetic Insights office, which is being guarded by some of the ERCS contingent. As you leave, Lorik asks you to keep bloodstains off the carpets. 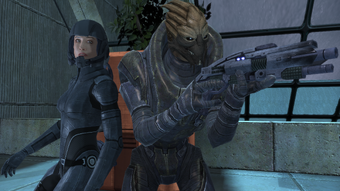 Head back down the mezzanine elevator and to the route that leads to the garage. There is an elevator just before the stairs to the Garage; step inside to reach Synthetic Insights office. The corridor before the main room is a good save point. When you get close to the door you can either convince the two ERCS Guards there to stand down or just shoot them. Talking to them earns morality points and they go away. Attacking them yields experience points. Note: Using a morality option to get rid of the extra guards also removes the Assault Drone you might otherwise encounter if you didn't hack the Synthetic Insights Security terminal.

Once the first two guards are dealt with, the place goes on lockdown and can only be reopened by Kaira Stirling's authorization, so you can't go back until the files are found.

The area has a lot of loot, though kill the hostiles first as you'll have ample time to ransack the place afterward. The SI office layout is roughly similar to the mezzanine's, only with two half walls in the lower level instead of a rock sculpture. The guards on the lower level are easy to deal with, and there are a few more guards on the upper level, including a sniper who doesn't like to come down. There are a couple of shootable Fire Containment Systems on the floor, which deal poison damage to nearby guards.

Once the guards are all dead start the item sweep from the lower level: west from where you came in, a locked crate (easy Decryption) next to a chamber entrance. Inside the chamber, a weapon locker (easy Decryption). On the part of your map labeled Lorik's Office (which is actually upstairs), a computer console (easy Decryption) and an upgrade kit.

Upstairs near the stairs there are three doors to the north. All of them are inaccessible except for the leftmost one (easy Decryption) (Legendary Edition: The inaccessible doors have no lighting compared to the original version, making the leftmost door stand out more). Beyond this door is a technician kit, a medical kit, and a wall safe (easy Decryption). The actual office of Lorik Qui'in has a medical kit, a secure wall safe (average Decryption), and his personal computer which contains the evidence. When you are ready insert the OSD Lorik provided then leave. 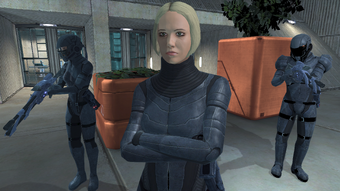 On your way out, you'll bump into Kaira Stirling, accompanied by more ERCS Guards. Stirling is a cop on the take, and the evidence Lorik is after will implicate her should it be revealed. Stirling refers to Shepard as a cop-killer, and you have to neutralize her all the same.

Stirling and her friends tend to stand where they are for a few seconds while pulling their guns out, presenting an opportunity to fire on the clumped group without retaliation for a moment. If High Explosive Rounds are used, specifically on a sniper rifle, it becomes entirely possible to eliminate Kaira and her two buddies instantly by simply pulling it out and firing in their general direction. A grenade or Singularity will provide similar results.

The people Kaira brought with her are an immediate threat in the melee, along with Stirling herself, a potent biotic. Another member of her squad is also a biotic who prefers pushing people. Get rid of Stirling first because she is the hardest target, but don't neglect the others because they will take you and your squadmates quickly as well -- the humans with sniper rifles and turians with shotguns are both quite dangerous.

There isn't a lot of cover so use the little you have to your advantage. Once Stirling's group on the top are eliminated, take care of the two on the lower level. They can be taken out from the upper level, or they will soon come upstairs on their own.

Once the place has died down, do a quick sweep of the complex for any crates you may have missed and head out of the office.

When you reach the main level again, you run into Gianna, who is curious about the ruckus in the Synthetic Insights offices. Respond whichever way you want. Gianna asks to speak with you at the hotel bar, before you try to talk to Qui'in. Follow her advice for better story immersion and gameplay rewards. If you're aiming for expediency regardless of missed opportunities just give the evidence to Qui'in, or alternatively betray the turian by giving the evidence to Anoleis for the pass and a basic credit payout. 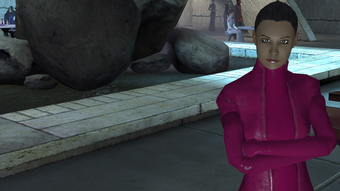 If you choose to speak with Parasini again at the hotel bar, she reintroduces herself as an Internal Affairs agent. You can ask questions about what has been going on: apparently, Anoleis has been driving business away by increasing rent prices on Noveria facilities. He is breaking the golden rule of the planet, which is "don't rock the boat." Parasini asks you to convince Qui'in to testify before the Executive Board that governs the planet, returning to Anoleis' office to continue posing as his secretary afterward.

At this point Shepard now has three possible choices: give the evidence to Anoleis or Qui'in anyway, or convince Qui'in to testify against Anoleis. Mine this mission for all the morality points it's worth.

You can gain more experience and morality points by playing the Noveria game yourself. Convince Qui'in to testify, then blackmail Anoleis by telling him about the evidence in your possession (provided Shepard is sufficiently charismatic or intimidating). Depending on dialogue choices, it's possible to get more experience points here, but only along with additional Renegade points. Once you've taken advantage of the administrator's weakened position, you can speak to Parasini and give her the evidence. Parasini will arrest Anoleis, promising Shepard a beer the next time they cross paths. If you want to avoid getting Renegade points, arresting Anoleis straightaway is the quickest option which also yields maximum experience points possible. 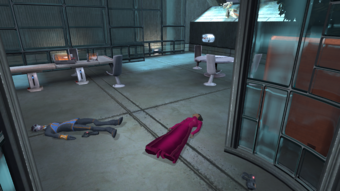 If you inform Anoleis that his secretary is an internal affairs agent he will bring her in to "fire" her. Their resulting argument ends in Anoleis and Parasini killing each other, netting yourself some Renegade points. Note that returning to Lorik Qui'in in this instance will not reward you with a pass; you must take the one from Anoleis' body. Qui'in is also reluctant to reward you with anything, you need to badger him for money. At least 6 Charm or 8 Intimidate is required before he gives you a measly 250 credits for your trouble.

Note: If you still haven't delivered Opold's package to any recipient you can use it to leverage a pass from Anoleis but only if the evidence hasn't been handed over to anyone for the moment and you haven't had the salarian arrested or killed yet. If otherwise, it loses relevance in this mission.

The wall safe in Anoleis' office can be bypassed (easy Decryption) only if he's arrested (or dies resisting arrest). Once you are done, head to the garage or finish up on any other outstanding Port Hanshan interactions.

If Gianna Parasini didn't die here, you can meet her again on Illium for that beer. It doesn't come free, though.