1 of 2
You've found Rift Station held by the battered survivors of the science team. It's obvious they've had a bad time, and can't hold out much longer.

This mission can be acquired in 3 ways:

In order to progress the story you'll eventually need to get into the Secure Lab as the main source of the survivors' worries is held there.

One way is through the restricted area at the Rift Station Main Area.

This route provides extra fighting, though not particularly difficult, and accompanying extra experience and credits. Warning: If you do this, all Rift Station characters will react with alarm to your actions and will not transact with you again. No more shopping from Petozi, and you can never acquire nor complete Noveria: Quarantine upon turning everyone hostile.

Begin by hacking the door to the "Restricted Area" -- it's near the med bay, and has two Assault Drones guarding it. The drones will attack immediately - gun them down. Then, before entering the door, you have the option of returning to the room you just left and fighting the guards there. Also optionally, you can head all the way back to Captain Ventralis and dispose of him and his two henchmen.

Then enter the door you hacked and fight your way through another series of guards, to reach the entrance to Benezia's room. Open all the crates you can find before entering her room; you can even head out this end of the maintenance corridor to kill the lone Rachni Soldier.

Another way is through a maintenance back door at the Quarantine Lab. Approaching Dr. Zev Cohen at the Med Bay and doing the Noveria: Quarantine mission for him rewards you with a pass to the back door. This is the more peaceful solution of the two options available and results in relatively minor casualties.

Note that upon successfully sneaking in, you can still choose the alternative of fighting your way in for extra credits and experience.

Head back down past Han Olar and into the maintenance area, which looks like a cave. You will enter unopposed and without being detected, and will not provoke fights with guards. On the way there is a single Rachni Soldier, so kill it and enter the back door.

When you walk through there is a crate on the catwalks and then when you reach a door on the right, bypass it because there is an upgrade kit in the next room. Don't bypass the door unless you want to start a fight with the guards, however since they can't reach you right now you can just get the small amount of exp associated with it. Once you are done head back to the door and save your game before entering.

Fate of a Species Edit 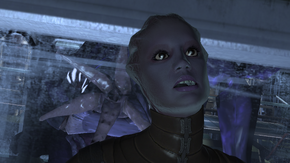 The mission ceases to be of relevance once you reach Benezia in the Secure Lab; see Noveria: Matriarch Benezia for handling the showdown with her. However, it is brought to the fore again shortly afterward.

When Benezia finally dies, move a bit closer to the Rachni Queen's tank. You will enter a conversation with the Rachni Queen through one of the dead commandos. The dialogue factors in whether you've dealt with Noveria: The Hot Labs yet or not. You can ask questions about her history and her plans if Shepard releases her. Now you have the ultimate choice: activate the acid tanks and kill off the rachni once and for all, or allow the Queen to leave and begin anew.

You get a cutscene showing your actions. The mission is marked complete when you reach a decision regarding the Queen.

If you freed the Rachni Queen, your attention will be called on Illium by an asari whose life was saved by the rachni.

If you freed the Rachni Queen, she will repay you with Rachni Workers as a War Asset (+100) if you still choose to save her in Mass Effect 3.

If you killed her in this mission then a new Queen called the Breeder will take its place. If you choose to spare the Breeder, it will initially provide the workers (+100) but will turn traitor later, resulting in the loss of the rachni assets (-100) as well as Alliance Engineers (-100).

Retrieved from "https://masseffect.fandom.com/wiki/Noveria:_Rift_Station?oldid=463869"
Community content is available under CC-BY-SA unless otherwise noted.