The Observer is a Remnant unit. On the battlefield it fulfills the role of basic ranged support, dealing continuous damage while floating overhead. 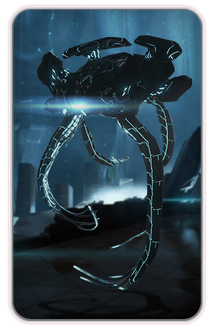 Observers, mid- to long-range Remnant drones, can be seen at most Remnant sites. They are equipped with element zero cores that allow them to levitate, and can normally be seen scanning or conducting maintenance at these sites. While they are the least robust of the Remnant bots, Observers are still a threat to unprepared explorers if provoked.

Examination of destroyed Remnant Observers shows they have multiple sensor vectors—visual, aural, electromagnetic, and others as yet undefined—and a comprehensive toolkit of equipment for observation and maintenance, including an ultraviolet beam laser. Serving partially as its primary weapon, the frequencies of an Observer's laser appear to react with Remnant structures to induce a repair cycle. Observers are also capable of bringing other Remnant online, likely as part of their maintenance duties.

When asked, Peebee explains the name "Observers" with "Everywhere you go, they seem to be looking at you."

Observers emit beam lasers from their central "eye" that can inflict massive damage over time.

Observers possess shielding and an ability to fly, giving them innate resistance to disabling skills such as Pull or Singularity. This airborne agility also helps them evade missile skills.

Pelessaria B'Sayle creates a helpful Observer named "POC" short for Proof of Concept. This observer is a central theme for a number of Peebee's missions on Elaaden.