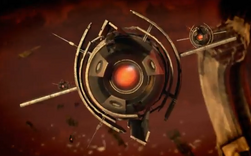 Oculi are cybernetic constructs, being piloted (in the case of those used by the Collectors) by a single Collector drone. Each drone is stripped down until only its nervous system remains, with the remaining tissue hardened to withstand vacuum and integration into an Oculus shell.

Oculi possess powerful beam weapons, similar to other Reaper and Collector weaponry, and can invade an enemy ship by cutting into its hull after jettisoning part of its armor.

The Normandy SR-2 is attacked by several Oculi when attempting to reach the Collector Base. The Oculi were apparently left on guard in the local debris field and only activated as the Normandy approached. While most of the Oculi are destroyed by the Normandy's weapons or by accidentally flying into debris, one is able to penetrate the ship's hangar deck, losing its outer shell in the process. It is eventually destroyed by Commander Shepard.

It is likely that the Collectors gained the Oculus technology from the Reapers.

The Oculus' particle beam is strong enough to slice through a hull without Heavy Ship Armor, and can potentially kill Jack if the Normandy lacks the upgrade.

The Oculus' beam weapon is much stronger than an ordinary particle beam, and will blast away any shields or barriers in a moment, especially on higher difficulties. It fires its weapon in very long bursts, thus anything longer than a brief exposure to this weapon could be fatal.

The Oculus has an incredibly strong armor, which acts as its health. 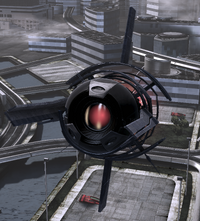 Oculi are deployed en masse by the Reapers during their 2186 invasion, serving as atmospheric and exoatmospheric fighters and interceptors. Several Oculi can be seen during the initial attack on Earth, attacking Alliance fighters and A-61 Mantis Gunships. Squadrons are also seen in action over Palaven and later during the battle to retake Earth.

No Oculus directly engaged Shepard during the war, in contrast to the Normandy incursion earlier.