Mass Effect: Discovery
Olan Kooth, also known as Agent Zeta, is a former Special Tasks Group operative. He is a powerful biotic obsessed with augmenting his already-considerable power through any means necessary.

Kooth was discovered by the STG as a child. His natural biotic aptitude was considered off the charts, so the STG trained him to become one of the deadliest operatives at their disposal and assigned him as "Agent Zeta". Originally a sweet child by all accounts, as an adult Kooth developed a compulsion to boost his biotics and began experimenting on himself when his military-grade bio-amps couldn't keep up with him. He eventually became mentally unstable, forcing the STG to cut ties with him, and he has been working freelance ever since.

Sometime during Zeta's travels he came across a set of mysterious spikes. He took pieces of it with him and incorporated the technology into his own body. It managed to channel his biotics into unprecedented levels, but only for a while. The amplified strain on his nervous system resulted in permanent damage, and if he failed to learn how to properly harness the tech it is going to kill him.

Desperate to find more sources of similar tech to study, he scoured the galaxy for leads and personally verified rumors. Hearing of a quarian telling stories about similar machinery, Zeta tapped STG networks and came up with the name Shio'Leth vas Novarra, a scientist with ties to the Andromeda Initiative. 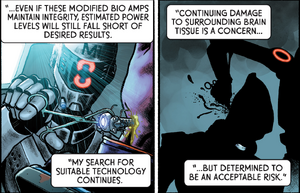 At yet another round of self-experimentation, Zeta works with three LOKI mechs to replace an overloaded bio-amp with an improved one, deeming the continuing damage to brain tissue a necessary but acceptable risk. The LOKIs are fried along with much of Zeta's immediate surroundings upon activation of the new amp.

He resumes tracking Shio after the incident, barging in on the quarian's hideout in the lower wards of the Citadel. Despite bringing two armed LOKIs with him as backup, Shio manages to escape his clutches and the ensuing commotion results in panicked civilians and the LOKIs' destruction. Zeta's bio-amp exploded at an inopportune time and nearly killed them both. 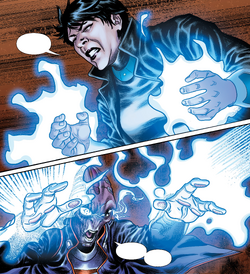 Zeta's pursuit then takes him to a planet where Shio's home ship the Novarra operates a strip-mining camp. He intends to pump information out of Viegle, Shio's husband, and begins annihilating the camp with raw biotic energy upon his arrival. Zeta faces unexpected resistance when another biotic, Luna Shanks, confronts him in a ploy to buy time while Viegle is transported to safety by her companion Sanjin Vinnick. Zeta recognizes her from the Citadel and believes she is following him, interrogating her why while pitting biotics against biotics.

As the combatants are battling each other with a cliff on one side, Zeta manages to throw Shanks off into the chasm with his powers, overloading his amp in the process. The Novarra's militia then arrive and attempt to stop him with massed gunfire, but even while handicapped Zeta slays them all by biotically breaking their bones. He corners Viegle and successfully tortures Shio's location out of him before storming off the planet.

On Omega, Zeta has just cornered Shio when a large group of heavily-armed people arrive and open fire at him. Shanks, still alive after their battle earlier, teams up with another biotic in the group to trigger a biotic explosion. A large chunk of Zeta's cybernetics are destroyed in this, allowing Shanks to snatch Shio away from him, although the salarian has enough strength left to impale Shanks with a thin pole through her gut. Shanks retaliates by firing her M-22 Eviscerator at his face point-blank, although somehow the only injury he receives is severe burns on the left side of his face. Infuriated, Zeta lets loose another powerful biotic outburst that knocks everyone off their feet, allowing him to escape the scene. 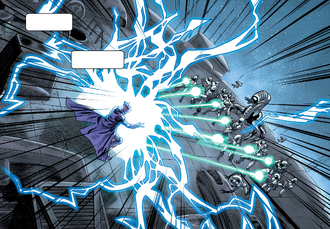 Before leaving the quarian behind, Zeta extracted the location of the Kholas Array from him. His judgment already impaired and experiencing almost unbearable pain, he goes there thinking it is a source of the mysterious tech in his amps, although he is besieged by numerous geth platforms after setting foot on the outer hull. Fully capable of holding his own against over a dozen infantry, heavy and drone platforms he nevertheless receives assistance from Vinnick, who accompanied Shio there on a mission for the Initiative. Zeta is persuaded by Vinnick to help guard Shio against the geth in return for help about the tech in his amps, but Shio informs him the geth had no pertinent tech for organics at the array.

Vinnick tries to keep Zeta on the task at hand by calling him with his birth name, but the salarian remembers his handlers told him not to respond to that name again. He channels his anger at the geth platforms assaulting them. Resigned to his fate and feeling he cannot contain his power any longer, Zeta advises the turian and quarian to run before experiencing a massive biotic meltdown.

Retrieved from "https://masseffect.fandom.com/wiki/Olan_Kooth?oldid=511017"
Community content is available under CC-BY-SA unless otherwise noted.