After entering Aria's Bunker, speak with Aria's hacker. She will ask the Commander to trigger terminals scattered throughout Cerberus-controlled areas of Omega in order to increase the bunker's operational capabilities and control over the station. 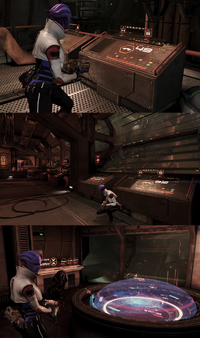 After starting the Talon Territory mission, head forward until you climb up the ladder to the airlock. The first console should be to your right as you reach the top of the ladder, next to some lift controls.

After continuing along the mission, there will be a door that you need to enter, followed by some stairs going down. You will enter a room with many monitors and Cerberus troops. After taking them out, the second console will be in the lower monitor area, in the right corner.

In the next area, after taking out more Cerberus troops, there will be two rooms off to the right. One that deactivates the Cerberus lockdown, and another with an Injured Talon. Right next to the Talon is the final console.

If all consoles were found, Aria's hacker will say that she blocked enemy access to critical areas and that the frontal assault should be less treacherous now.

Retrieved from "https://masseffect.fandom.com/wiki/Omega:_Assist_the_Hacker?oldid=501787"
Community content is available under CC-BY-SA unless otherwise noted.