Aria's mechanic requires your assistance. Find a Kehri power inverter, and bring it back to the bunker.

After entering Aria's Bunker, speak with the batarian mechanic. The bunker's power inverters keep shorting out, and he needs Commander Shepard to retrieve a new one. 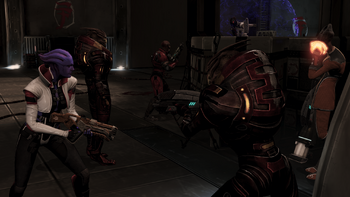 When you reach the Talon Outpost, after the cutscene explaining the Adjutants, there is a group of boxes by the left wall near the entrance.

The power inverter should be behind these boxes, beside a salarian who's hiding behind them. Beside the salarian are some turians, a batarian and a stripe-faced krogan. Be sure to grab it before you go to fight Cerberus at the landing pad, either before or after talking to Nyreen.

Retrieved from "https://masseffect.fandom.com/wiki/Omega:_Assist_the_Mechanic?oldid=501795"
Community content is available under CC-BY-SA unless otherwise noted.