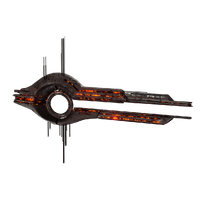 The Omega 4 relay is surrounded by hazard beacons and automated warnings. Over the last thousand years, many ships have attempted to pass through it, but none have returned. The only ones to pass freely back and forth through the relay are the mysterious Collectors.

There are many theories why ships never return from Omega 4. Some say there is a black hole at the far end; others (mostly the impoverished underclass of Omega) believe there is some form of earthly paradise. Most, however, simply think that the Collectors capture or destroy those passing through the relay. 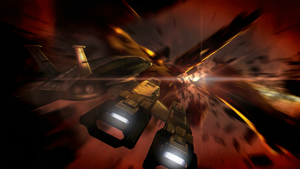 The Omega 4 Relay actually leads to the galactic core, where the Collector base resides on the edge of a black hole. Standard relay transit protocols often result in a drift of several thousand kilometers from the intended position, but this is fatal in the galactic core. As a result, the area is filled with debris from the many ships which had used the relay without a Reaper IFF and hence did not survive. The Reaper IFF triggers advanced safety protocols in the Omega 4 Relay, which would ensure a ship survived coming into close range of the black hole.

Retrieved from "https://masseffect.fandom.com/wiki/Omega_4_Relay?oldid=517303"
Community content is available under CC-BY-SA unless otherwise noted.