Mass Effect 2
Mass Effect 3
Oriana Lawson is Miranda's sister. Her genetic traits are identical to those of her sister. She lives with a normal family unaware of her origins.

Oriana was grown by Miranda's father in 2166 when Miranda was just a teenager. Seeing that her father wanted to replace her in his plans for developing a dynasty, Miranda took Oriana to Cerberus. She was adopted and was given a normal life.

In 2185, at the time nearing her 19th birthday, Oriana's father pays Niket to find and retrieve her. Niket tracks her down to Illium, and uses the Eclipse mercenary group to try and bring her back. Accompanied by Commander Shepard, Miranda prevents the Eclipse from capturing Oriana, and they succeed.

Later, Shepard can suggest that Miranda should talk to Oriana. If she does so, the sisters bond for a while, revealing details about Oriana that Miranda never knew. Oriana plays the violin and loves the adagio movement of Nielsen's Fifth, something that Miranda also likes. Oriana wants to work in colony development, showing a sense of humor her sister doesn't share by joking about it.

As a consequence of the bonding, Oriana later sends a message of thanks to Shepard, asking that the Commander doesn't tell Miranda she sent the message, and for Miranda to stop reading Shepard's mail. Chat excerpts intercepted by the Shadow Broker later shed some light over the sisters' deepening relationship. 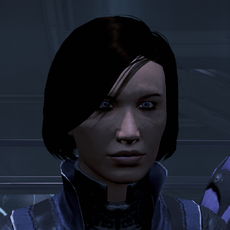 By 2186, Oriana's father captures her after reaffirming his support for Cerberus. Henry takes her to Sanctuary on Horizon, a supposed safe haven from the war. Miranda becomes aware of Oriana's disappearance and she knows instinctively it's their father who kidnapped her. She informs Shepard of Oriana's disappearance but is unable to provide hard evidence that matches with her suspicions.

Eventually, Miranda is able to prove her suspicions with diligent information gathering. Miranda tracks her sister down to Sanctuary and investigates their father's shenanigans alone, where she encounters the true face of Sanctuary: a place for experimenting on helpless refugees, turning them into husks or indoctrinated them to discover how to control the Reapers.

Shepard's team arrives on Sanctuary tracking Kai Leng. They discover Oriana being held hostage by her father, who uses her as a human shield. Henry alleges that Oriana tried to shoot him. Shepard can try to convince Henry to let her go, if they are unsuccessful, they can shoot Oriana in the leg, allowing Miranda a clear shot to defenestrate Henry with her biotics. If Shepard is able to convince Henry to let Oriana go, Miranda is not interested in bargaining with him and defenestrates him.

If Miranda survives the events of Horizon, she comforts a traumatized Oriana and takes her away from the death and destruction in Sanctuary. If Miranda is mortally wounded by Kai Leng, in her last moments, she is able to tell Oriana to have all what she never could: a normal life, marriage, kids. Oriana grieves as her sister then passes away, saying that she only wanted her sister.

If Shepard activates the Crucible much later and chooses to take control of the Reapers, Miranda and Oriana can be seen working together, looking at Reaper schematics. 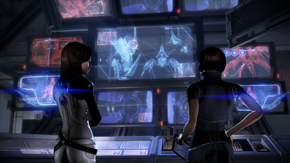 If Miranda did not survive the suicide mission, Oriana will be the one to inform Shepard that Sanctuary is not what it seems over the radio. She identifies herself in full, taking on the surname of her father, Lawson, in the first broadcasted warnings that Shepard hears. Through her kinship with Miranda, Shepard and company deduce that she's a link to Cerberus they've been looking for.

Oriana investigates Henry's activities, leaving video logs in much the same way Miranda does had she lived, and finally Shepard meets her in the tower held at gunpoint by her father.

Oriana can be killed in that standoff by falling to her death with her father, if Shepard doesn't convince Henry to let her go and the Commander doesn't shoot Oriana in the leg to free her.

Retrieved from "https://masseffect.fandom.com/wiki/Oriana_Lawson?oldid=479293"
Community content is available under CC-BY-SA unless otherwise noted.