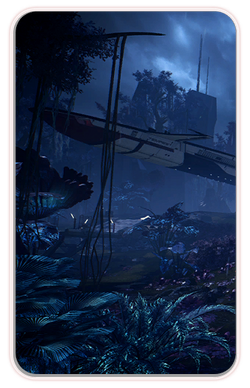 Initiative scientists have asked you to analyze mutated wildlife in order to determine what's causing the accelerated growth rate of life on Havarl.

Speak to the Nexus Scientists Dr. Tassana Rilar and Dr. Erich Baumgarten (marked with a

Activate the Genetic Archive Database in the nearby building and upload the three messages within.

The Mutated Rylkor are located just to the east of the Forward Station in the Central Wilds. There are two Mutated Rylkor, and they can be scanned after you kill them.

Find the Mutated Eiroch located south of the Forward Station in the Ancient Courtyard.

There is a Roekaar Datapad in the middle of the camp.

There is a small cave with a lootable container and a Mineral Cache slightly to the west of the camp. There is also an Angaran Integrated Tech Node in the middle of the camp that can be scanned for +100

Reading the datapad reveals the location of a Roekaar base in the north of the Ancient Courtyard. Clear out the base and head to the back to find the Roekaar Genetic Research Log, and access it to learn about the Roekaar's plans. SAM asks whether the files should be immediately deleted, or if you would like to copy them before wiping the computer.

Note: Neither deleting nor copying the data has known consequences.

There are a number of lootable containers and a Mineral Cache in the camp.

There is a Roekaar Communications terminal next to the Roekaar Genetic Research Log:

Return to the scientists Edit

Head back to Pelaav Research Station. The scientists are delighted over the data you've returned to them.

Retrieved from "https://masseffect.fandom.com/wiki/Overgrown?oldid=516323"
Community content is available under CC-BY-SA unless otherwise noted.