watch 02:45
The Loop (Games)
Do you like this video?
Play Sound
This article or section is a stub. You can help Mass Effect Wiki by expanding it.

Paaran Shie is the governor of Aya. She handles the administrative side of civilian affairs with a balanced mindset, willing to endure and fight for the obligations that come with her office.

Paaran's homeworld was destroyed by the kett. Her family helped settle Aya and she eventually became the governor by out-arguing all other candidates for the position.

She has ten brothers and eight sisters, who are prohibited from bothering her while she's working. When her family gets together, she likens the noise to standing next to Aya's largest waterfall. Her own mother thinks she became governor so people will have to listen to her, and she doesn't dispute the assessment.

Paaran doesn't have someone special in her life currently, though she may be open to suggestions someday. Her idea of relaxation is being more productive, and her brothers all think it will eventually stress her out.

Paaran's government sometimes conflict with the aims of the Angaran Resistance led by Evfra de Tershaav. She recognizes the Resistance's competence at protecting her people, as well as their weaknesses, hence she settled for a power-sharing scheme with Evfra that allows her to maintain just enough control over his actions.

Pathfinder Ryder encounters the governor after leaving the Tempest at gunpoint during first contact with the angara. Paaran introduces herself as the civilian leader of Aya and tells Ryder some things about her people. Professing a cautious demeanor over a visitor the angara know nothing about, Paaran then escorts the Pathfinder to the Resistance Headquarters to meet with Evfra. 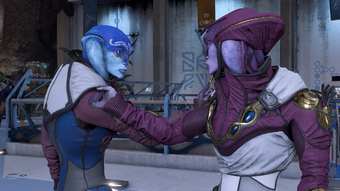 Following the successful rescue of Moshae Sjefa and her return to Aya, Paaran leads the delegation welcoming the cultural icon back. The governor is impressed; the angara had been alone in their fight against the kett for too long, and Ryder has proven to be an ally. She now welcomes discussion about an alliance with the Andromeda Initiative, and declares Aya as open to the visitors. For starters, she opens up the Andromeda Initiative Embassy opposite her chambers at the Governor's Office.

Ryder can later speak with Paaran in her office on a variety of subjects, the intro of which varies depending on whether she is spoken to before meeting the Moshae at the local Remnant vault and the fate of the exaltation facility on Voeld. She's grateful for the angaran captives liberated if the facility was kept intact, though she also appreciates that none of her people there will have to suffer the process if the facility was destroyed. She wants to believe Ryder and the Initiative want to help, noting they're different from the kett, or she has learned to savor small victories if Ryder reminds her of the long battle ahead.

When questioned about Evfra, Paaran states that while her counterpart would prefer secrecy and isolation, she believes that neither the angara nor the Initiative can defeat the kett on their own.

When questioned on why she never mentioned Kadara Port when the Pathfinder first arrived, Paaran admits she assumed Ryder already knew, as her people were unaware of the schism between the Initiative and their exiles. Furthermore, now knowing that Evfra kept Vehn Terev's betrayal of the Moshae to the kett secret from everyone, she vows to make the Resistance leader answer for that.

If Ryder avoided killing Akksul, Paaran will commend the Pathfinder's restraint, as this weakens the Roekaar's cause.

Following the revelations at Khi Tasira that the Jardaan created the angara, Paaran asks Ryder's help in assuaging her people's shock, stating that just because they were created doesn't mean they don't control their own destiny.

Retrieved from "https://masseffect.fandom.com/wiki/Paaran_Shie?oldid=524179"
Community content is available under CC-BY-SA unless otherwise noted.