Edit
watch 02:19
Wiki Targeted (Games)
Do you like this video?
Play Sound
“Thank you, Commander. Somewhere, deep in the fabric of reality, our actions are recorded and remembered. Yours will be remembered for eternity.”

Padok Wiks is the salarian STG base commander on Sur'Kesh.

If Mordin Solus did not survive the events of the Collector Attacks, Wiks assumes his role in the missions on Sur'Kesh and on Tuchanka.

Padok is a scientist for the STG, researching a cure for the genophage. However, his previous career had him involved with uplifting lesser species. This is something Padok Wiks deeply regrets, as during the course of his career, he became fascinated with the role that evolution plays in the course of the galaxy. Because he gradually came to the conclusion that every species is valuable and has something to contribute to the evolutionary destiny of the galaxy, he now believes his fellow salarians were arrogant in believing they had the right to interfere with the destinies of either the krogan or any other lesser species, even if that interference took the form of "uplifting." This is what motivates him to try to cure the genophage.

If Padok Wiks is Wrex's STG mole, the footage he presents at the summit will come from security cameras as opposed to Mordin's handheld footage.

When Commander Shepard arrives at the STG base, Padok defuses a potential conflict when STG sharpshooters train their weapons on the krogan leader at his violent landing. Padok apologizes for the incident, explaining that the war has everyone on edge. He then directs the Commander to the elevator which takes them down to see the krogan females, after giving Shepard a brief orientation.

If Mordin is not present, Padok accompanies Shepard to see the krogan females and shows the Commander the only surviving female. The base comes under attack from Cerberus soon after and Shepard orders the female's release, though base protocol prohibits "specimen" release in event of a lockdown. Padok solves the problem by pointing a gun at the head of the salarian responsible, and volunteers to escort the krogan female through the various levels of the base.

After the mission, Padok offers to help cure the genophage to secure a krogan-turian alliance and remains aboard the Normandy SR-2. He also christens the unnamed female krogan "Eve". After the cure is complete, he proposes the use of the Shroud. 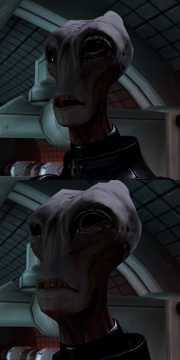 Shepard can choose to question Padok about Mordin; Padok will explain that he actually used to work with Mordin once, though Padok believed that there was more to evolution than just random mutation. Mordin disagreed. This caused a drunken argument in which Padok punched Mordin in the face. Mordin got a black eye, and Padok broke fingers, so they decided to call it even and go back to drinking.

Padok develops a friendship with Eve aboard the Normandy. If Shepard comments on this, Padok says that "it is more of an agreement not to kill each other". Padok's concern about Eve goes beyond mere professional concern, he feels it is of the utmost importance to cure the genophage and restore the krogan and that Eve should have an important part in doing so.

Shepard can speak with Padok about the latter's religious beliefs. Padok believes that the natural order of the universe is too perfect to be merely chance and that there is a higher power in place, referring to it as the Originator. He believes that one should not upset this balance by interfering with evolution as the salarians had done with the krogan. He is in complete disagreement with ideas of "uplift" of species, saying that natural evolution should take precedence.

During the mission to cure the genophage, Padok accompanies Eve and constantly monitors her vital signs so as to deliver an optimal cure without harming her. When the Thresher Maw distracts the Reaper Destroyer, Padok finishes the cure process in the Shroud.

If Shepard decides to help cure the genophage, then Wiks will give his life to spread the cure. If the Commander takes Dalatrass Linron up on her offer then Shepard will be forced to shoot Padok, unless Eve is dead and Wreav is Clan Urdnot leader, in which case he can be convinced to stand down. Wiks will later send a message to Shepard, explaining that he has retired to a colony, living as a farmer and intending to take the truth about the genophage cure to his grave.